“Exergames” Not Perfect, but Can Lead to More Exercise 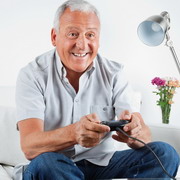 Exergames also have proven to
be useful; © panthermedia.net/
Tyler Olson

Active video games (AVGs), also known as "exergames," are not the perfect solution to the nation's sedentary ways, but they can play a role in getting some people to be more active. Researchers of Michigan State University say that most of the AVGs provide only "light-to-moderate" intensity physical activity.

And that, says Wei Peng, is not nearly as good as what she calls "real-life exercise."

"For those not engaging in real-life exercise, this may be a good step toward this," said Peng, an assistant professor of telecommunication, information studies and media. "Eventually the goal is to help them get somewhat active and maybe move to real-life exercise."

Of the 41 AVG studies the researchers looked at, only three of them proved to be an effective tool in increasing physical activity. "Some people are very enthusiastic about exergames," Peng said. "They think this will be the perfect solution to solve the problem of sedentary behavior. But it is not that easy."

It's generally recommended that the average adult get 30 minutes of moderate to vigorous exercise each day. Unfortunately, most of the games that were studied provided only light activity, "so they were not meeting the recommendations," Peng said.

Peng said exergames also have proven to be useful when used in structured exercise programs, such as those used for rehabilitation or in senior citizen centers.

"Just giving the games to people may not be a good approach," Peng said. "They may not use it or use it effectively. It is better if used in a structured program where there are more people participating."