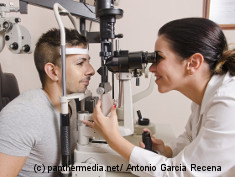 Twenty-five per cent of homeless people surveyed in Toronto had vision problems up to and including blindness, four times higher than the rate of the overall population in North America, a new study by St. Michael's Hospital has found. Glasses or contact lenses would help only two in five of those people, Dr. Myrna Lichter, an ophthalmologist, wrote in the study published in JAMA Ophthalmology.

When non-refractive (not related to vision) eye conditions were included, such as cataracts, glaucoma and macular degeneration, 35 per cent of the homeless people surveyed had one or more eye abnormality.

"Our data suggests that large inequities exist within the Canada eye care delivery system," Dr. Lichter. "Homeless people represent one of the most vulnerable groups within our society. They are at increased risk of a variety of illnesses and rates of substance abuse and mental illness are typically high. Poor vision in the general population is known to be associated with reduced wellbeing and income potential."

Dr. Lichter said that while there is a growing body of literature on homelessness and health, little is known about the eye health of homeless people. In this study, 10 of Toronto's 34 homeless shelters were selected at random as were bed numbers in those shelters--as the beds were filled, the individuals were invited to participate in the survey.

Of the 100 people surveyed, 62 per cent were men, the median age was 48 and the median length of homelessness was 12 months.
Dr. Lichter said the findings probably underestimate the extent of the vision problem among the homeless population, as people who stay in shelters are better fed and generally healthier than those who live on the streets.

Of those surveyed, 32 per cent had been previously diagnosed with an eye problem. Of the 61 participants who reported using prescription glasses in the past, only 18 (30 per cent) still had those glasses; most said their glasses were lost, stolen or broken and they couldn't afford to replace them.

Dr. Lichter advocated for the establishment of vision-screening programs in Toronto's shelter system that would include both eye exams and free eyewear. Mobile eye screening programs have been effective in South Africa, Costa Rica, the United States and the United Kingdom.

She said 89 per cent of participants in her study indicated interest in free eye exams. Fourteen per cent of those surveyed said they had seen an optometrist or ophthalmologist in the past year, compared to 41 per cent of the Canadian population.