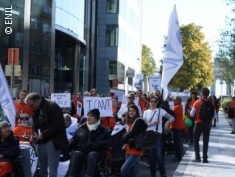 Feelings of pride, unity and solidarity are still vibrating after 7th Freedom Drive in Brussels; © ENIL

The 7th Freedom Drive was a great success with over 400 persons attending the March and over 200 – the other Freedom Drive events. Many of the national delegations met with their Members of the European Parliament and there are great promises for closer collaboration.

This first Freedom Drive in Brussels was organized by the European Network on Independent Living (ENIL) team with the help of many allies throughout Europe. The hard work has paid off well with many Freedom Drivers expressing the inspiration the Freedom Drive has raised.

The ENIL team members living in different European countries started arriving in Brussels from Sunday, September 27. First stop for all (even before checking in hotels) was the ENIL office on rue l’Industrie 10, where the last Freedom Drive preparations were in full swing! Boxes with t-shirts and printed materials were being carried, transport arrangements were still in process, last-minute technical problems were dealt with and everybody was busy, running and wheeling around!

The ENIL Parliament meeting was hosted by MEP Plura (Vice-president of the Disability Intergroup) raising important issues for all disabled people. Active participation from MEPs demonstrated that the issues discussed are important and cooperation is welcomed.
ENIL thanks the city of Brussels for the BEL and the region of Brussels (Ministry of equal rights) for its support of the ENIL celebration dinner. Great food was accompanied by great music. ENIL thanks the STIB and region of Brussels (Ministry of mobility) for its work to organize transport.