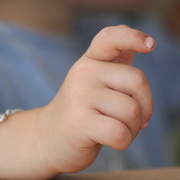 Researchers found markers for measuring the ability of children with Attention Deficit Hyperactivity Disorder (ADHD) to control impulsive movements, which may reveal insights into the neurobiology of ADHD, inform prognosis and guide treatments.

In a study conducted by researchers at the Kennedy Krieger Institute in Baltimore, MD and the Cincinnati Children's Hospital Medical Center, children with ADHD performed a finger-tapping task. Any unintentional "overflow" movements occurring on the opposite hand were noted. Children with ADHD showed more than twice the amount of overflow than typically developing children. This is the first time that scientists have been able to quantify the degree to which ADHD is associated with a failure in motor control.

"Despite its prevalence, there is a lack of understanding about the neurobiological basis of ADHD," said Stewart Mostofsky, Director of the Laboratory for Neurocognitive and Imaging Research at the Kennedy Krieger Institute. "A critical obstacle in ADHD is the lack of quantitative measures of brain function that would provide a basis for more accurate diagnosis and effective treatment."

In the study, researchers looked at 50 right-handed children – 25 with ADHD and 25 typically developing, ages 8-12 years. Each subject completed five tasks of sequential finger-tapping on each hand. In this exercise, the children tapped each finger to the thumb of the same hand, in sequence. The tapping hand alternated between left-handed finger sequencing and right-handed finger sequencing. Excessive mirror overflow, defined as unintentional and unnecessary movements occurring in the same muscles on the opposite side of the body, were measured using video and a device that recorded finger position. These methods provided precise quantification of the amount of overflow movement, a major advance over prior studies that relied on qualitiative scales.

"This study used quantitative measures to support past qualitative findings that motor overflow persists to a greater degree in children with ADHD than in typically developing peers," said Mostofsky. "The findings reveal that even at an unconscious level, these children are struggling with controlling and inhibiting unwanted actions and behavior. Studying motor control weakness gives us a window to understanding the similar challenges that children with ADHD face in controlling more complex behavior, which can lead to improved diagnosis and treatment."