ADHD: School Support May Be Missing the Mark 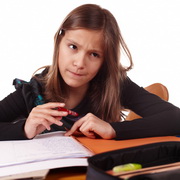 Inability to concentrate may be the
reason for educational failure among
ADHD children; © Christian
Schwier/panthermedia.net

New research from the University of Montreal shows that inattention, rather than hyperactivity, is the most important indicator when it comes to finishing a high school education.

"Children with attention problems need preventative intervention early in their development," explained lead author Jean-Baptiste Pingault, who is also affiliated with Sainte-Justine Mother and Child University Hospital. The researchers came to their conclusion after looking at data collected from the parents and teachers of 2000 children over a period of almost twenty years.

In this study, attention problems were evaluated by teachers who looked for behaviour such as an inability to concentrate, absentmindedness, or a tendency to give up or be easily distracted. Hyperactivity was identified by behaviour such as restlessness, running around, squirming and being fidgety. The researchers found that only 29 per cent of children with attention problems finished high school compared to 89 per cent of children who did not manifest these inattention problems. When it came to hyperactivity, the difference was smaller: 40 per cent versus 77 per cent. After correcting the data for other influencing factors, such as socioeconomic status and health issues that are correlated with ADHD, inattention still made a highly significant contribution which was not the case for hyperactivity.

"In the school system, children who have attention difficulties are often forgotten because, unlike hyperactive kids, they don't disturb the class," said Sylvana Côte, who led the study. "However, we know that we can train children to pay attention through appropriate activities, and that can help encourage success at school."

The results of the study have been published as mental health experts have begun to debate whether or not it would be appropriate to separate hyperactivity and inattention problems in the next edition of the Diagnostic and Statistical Manual of Mental Disorders (DSM). "These two health issues have now been more precisely dissected, and we may now need to define a differentiated type of inattention that is independent from hyperactivity, to improve our understanding of the phenomenon and better tailor interventions," Pingault said.


- More about the University of Montreal at www.umontreal.ca