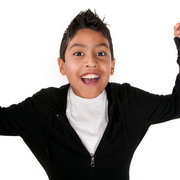 ADHD is diagnosed more in boys
than in girls; © panthermedia.net/
Scott Griessel

What experts and the public have already long suspected is now supported by representative data collected by researchers at Ruhr-Universität Bochum (RUB), Germany, and University of Basel: ADHD, attention deficit hyperactivity disorder, is over-diagnosed.

The study showed that child and adolescent psychotherapists and psychiatrists tend to give a diagnosis based on heuristics, unclear rules of thumb, rather than adhering to recognised diagnostic criteria. Boys in particular are substantially more often misdiagnosed compared to girls. These are the most important results of a study conducted by Professor Silvia Schneider and Professor Jürgen Margraf, both from RUB, and Doctor Katrin Bruchmüller of the University of Basel.

The researchers surveyed altogether 1,000 child and adolescent psychotherapists and psychiatrists across Germany. 473 participated in the study. They received one of four available case vignettes, and were asked to give a diagnoses and a recommendation for therapy. In three out of the four case vignettes, the described symptoms and circumstances did not fulfil ADHD criteria. Only one of the cases fulfilled ADHD criteria based strictly on the valid diagnostic criteria. In addition, the gender of the child was included as a variable resulting in eight different case vignettes. As the result, when comparing two identical cases with a different gender, the difference was clear: Leon has ADHD, Lea does not.

Many child and adolescent psychotherapists and psychiatrists seem to proceed heuristically and base their decisions on prototypical symptoms. The prototype is male and shows symptoms such as motoric restlessness, lack of concentration and impulsiveness. In connection with the gender of the patient, these symptoms lead to different diagnoses. A boy with such symptoms, even he does not fulfil the complete set of diagnostic criteria, will receive a diagnosis for ADHD, whereas a girl will not. Also the therapist’s gender plays a role in the diagnostic: male therapists give substantially more frequently a diagnosis for ADHD than their female counterparts.

In the past decades the diagnoses ADHD have become almost inflationary. Between 1989 and 2001, the number of diagnoses in German clinical practise increased by 381 per cent. The costs for ADHD medication, such as for the performance-enhancer Methylphenidate, have grown 9 times between 1993 and 2003.