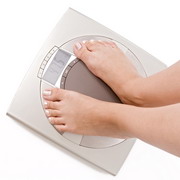 Weight and survival may be linked;
© panthermedia.net/Andreas Wolf

Patients with amyotrophic lateral sclerosis (ALS), also known as Lou Gehrig's disease, may be an exception to the rule that being overweight is a health hazard.

In a retrospective study of over 400 ALS patients, Massachusetts General Hospital researchers found that those who were mildly obese survived longer than patients who were normal weight, underweight or even overweight.

ALS is a progressive neurodegenerative disease affecting motor neurons in the brain and spinal cord. Death of these nerve cells stops the transmission of neural impulses to muscle fibers, leading to weakness, paralysis and usually death from respiratory failure.

During the course of their disease ALS patients usually lose even more weight than can be attributed to the loss of muscle mass caused by nerve destruction and the related muscle inactivity. Studies have shown that ALS patients burn more calories than would be expected from their limited physical activity, but the mechanism for this metabolic change is currently unknown.

Anne-Marie Wills, senior author of the report, says: "Our study was designed to investigate how cholesterol levels affect survival. We were surprised to find that body mass index or BMI – a measure of weight adjusted for height – made a large difference in survival. Patients with a BMI of 30 to 35, who would be considered mildly clinically obese, lived the longest; and patients who were overweight, with a BMI of 25 to 30, lived the second longest."

A previous smaller study suggested that ALS patients with higher levels of low-density lipoprotein relative to high-density lipoprotein might live longer. In order to test that association in a larger group of patients, the researchers team analyzed data on more than 400 patients who had participated in three clinical trials of potential ALS drugs.

Along with the results of initial blood tests taken when participants entered the trials, the researchers had access to follow-up blood tests for almost 200 participants and information on how long each patient survived without needing mechanical ventilation assistance.

Depending on the particular clinical trial, survival data was available for one to two years after study initiation. While higher baseline cholesterol levels were associated with longer survival, that association disappeared when the results were controlled for BMI.

As expected, the shortest survival was seen in malnourished or morbidly obese patients, but patients in the mildly obese range had the longest survival of any BMI group.


- More about the Massachusetts General Hospital at: www.mgh.harvard.edu