A biomarker for Multiple Sclerosis 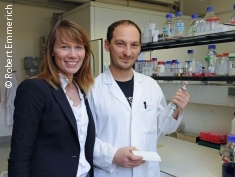 A blood analysis test by Stefanie Kürten and her colleague Damiano Rovituso is able to show which therapy is better suited for patients with multiple sclerosis; © Robert Emmerich

Patients with multiple sclerosis often receive a "hit and miss" treatment when the disease breaks out. A blood analysis is now for the first time able to reveal which of the two most important first-line drugs is better suited for which patients.

More than two million people worldwide live with Multiple Sclerosis (MS). In this disease, which progresses by successive flare-ups, the immune system destroys "by mistake" cells in the brain and the spinal cord. This leads to spots of inflammation that cause more or less severe symptoms, depending on their location and size: the affected persons may feel a tingling sensation in their arms and legs, they trip frequently or have vision problems. In extreme cases, they can no longer walk on their own and use a wheelchair.

So far, there is no cure for multiple sclerosis, but the available drugs can at least mitigate the symptoms. "We cannot even predict when a patient will have a next flare-up, or whether MS will develop after a first flare- up", says Stefanie Kürten, Professor of Anatomy and Cell Biology at the Julius-Maximilians-Universität Würzburg, JMU.

Although new drugs have been introduced to the market recently, there is no way of telling which of them is best suited for which patients. "Quite often doctors simply try one drug, and if it doesn't work, they try the next", says Dr. Kürten. This is, of course, very frustrating for both patient and doctor – all the more because it is a known fact that MS must be treated efficiently at an early stage to prevent its long-term progress and the loss of brain tissue.

Dr. Kürten's team has now succeeded for the first time in developing a biomarker for MS: a blood analysis may be able to help decide which of the two "therapy classics" should be used in the early phase of the disease. Patients with autoreactive B cells in their blood would need to be treated with Copaxone, whereas patients without such B cells are likely to benefit more from an IFN-beta therapy. These findings were made in cooperation with TEVA Pharmaceutical Industries and Cellular Technology Limited.

How is the biomarker test performed? "All we need are blood samples from the patients", explains Dr. Kürten’s colleague Damiano Rovituso. The white blood cells are isolated from the samples and stimulated for four days in a cell culture so that the immune system's memory B cells start producing antibodies. "We then determine whether these antibodies attack the tissue of the central nervous system." This is a highly specific test for multiple sclerosis, because B lymphocytes and their antibodies can contribute directly to nerve fibre damage.

The findings of the study have been published in the Scientific Reports journal. The scientists have performed tests on a total of 57 MS patients. Contributors to the study were the Departments of Neurology of the University Hospitals of Cologne and Würzburg, as well as the Klinikum Augsburg, the Caritas hospital Bad Mergentheim and the Charité Universitätsmedizin Berlin.

Before these new insights may find their way to standard treatment, they have to be confirmed by a clinical study with a larger number of patients. Stefanie Kürten says that such a study is expected to start in 2015, funded by the pharmaceutical company TEVA Pharmaceutical Industries. The study will be performed in cooperation with Stefan Braune, Professor of Neurology at the Technical University of Munich, TUM. He will recruit for the study patients from all over Germany through the nationwide network NeuroTransData GmbH.

In a next step, Stefanie Kürten wants to find out which target structures in the brain are attacked by the antibodies from the memory B cells of individual positive tested patients. By this she expects to gain further insight into the course of the disease. "We may then be able to develop therapies that attack the pathogenic B cells directly."

More about the Julius-Maximilians-Universität Würzburg at: www.uni-wuerzburg.de