A link between Jacobsen syndrome and autism 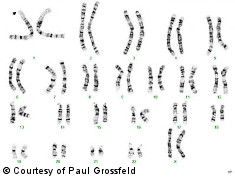 A deletion at one end of chromosome 11 is responsible for the rare genetic disorder known as Jacobsen syndrome; © Courtesy of Paul Grossfeld

A rare genetic disorder known as Jacobsen syndrome has been linked with autism, according to a recent joint investigation by researchers at San Diego State University and the University of California, San Diego (UCSD). In addition to suggesting better treatment options for people with Jacobsen syndrome, the finding also offers more clues into the genetic underpinnings of autism.

Jacobsen syndrome affects approximately 1 in 100,000 people, according to the National Institutes of Health. It occurs in a person when there is a deletion at the end of one arm of the 11th chromosome, known as an 11q terminal deletion. The symptoms and physiological changes vary, but commonly include intellectual disability, abnormal facial development, structural kidney anomalies and congenital heart defects.

The idea for the recent study arose when UCSD cardiologist Paul Grossfeld, while looking into heart defects associated with the disease, became interested in the cognitive impairments that were so common in this disorder. He reached out SDSU neuropsychologist Sarah Mattson, whose work primarily focuses on the effects of fetal alcohol exposure, and UCSD neuropsychologist Natacha Akshoomoff, an expert in autism.

The researchers quickly recognized a familiar suite of symptoms. "It became apparent that parents were reporting autism-like features," Mattson said. To test their theory, the researchers would need a controlled study and a larger sample size, and San Diego was the perfect location to do this.

Every two years, families with children who have Jacobsen syndrome come to San Diego from around the world for the 11q Conference to meet with one another and share the latest findings about the disorder.

"Because Jacobsen syndrome is a pretty rare disorder, the conference is extremely helpful for investigating research questions," Mattson explained.

Mattson, Akshoomoff and Grossfeld recruited 17 children and their parents for the study. They gave the parents behavioral and cognitive questionnaires about their children, and the researchers also observed the children themselves, aided by a diagnostic tool for autism known as the Autism Diagnostic Observation Schedule.

Eight of the 17 children met the criteria for autism spectrum disorder, which is "a much higher rate than the general population," Mattson said.

One of the primary implications for families dealing with Jacobsen syndrome is simply being aware that their children are at a higher risk for autism, Mattson said. Knowing this, they can investigate early intervention treatments to help their children better understand their particular way of seeing and interacting with the world as well as strategies for navigating social situations more easily.

The findings will also be of benefit to autism researchers, Mattson said, as it's another genetic clue to what drives the cognitive differences in people with the disorder. "We know there are functional genes within that region of the 11th chromosome, some of which are related to brain development," Mattson said. "Knowing this may give researchers more insight into Jacobsen syndrome as well as the development of autism spectrum disorder."

More about the San Diego State University at: www.sdsu.edu