A need for more music therapists in psychiatric health care 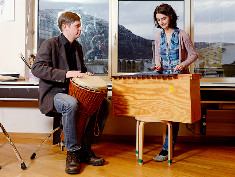 Christian Gold and Karin Mössler are doing research on the effects of music therapy; © Helge Skodvin

Music can help those without the means to express themselves to communicate. There is a need for more music therapists in psychiatric health care, says researcher Karin Mössler at Uni Research in Bergen, Norway. Music therapy is suitable for all ages, from children born prematurely to elderly people suffering from dementia.

"You can compare music therapy with the oil industry. Both fields look for resources, but we’re looking for resources in people. Sometimes they’re buried deep and difficult to find. Like the oil industry, we use sound waves and resonance. We use music as an impulse. It really helps people to access their own resources," explains Karin Mössler. She is a researcher at Uni Research in Bergen, and also works as a music therapist.

Research studies carried out at Uni Research and the University of Bergen show that music therapy has a documented impact on both mental health difficulties and the agitation experienced by elderly people suffering from dementia.

"The first study started 10 years ago. That’s what brought me and then Karin to Norway, and was the starting point for forming a research group within this area," says Christian Gold. He works as a researcher alongside Mössler at the Grieg Academy Music Therapy Research Centre (GAMUT) at Uni Research.

The study that they were both involved in was the first randomised, controlled outcome study carried out for music therapy in Norway. It showed that music therapy has a positive impact on people suffering from depression, schizophrenia and personality disorders. In 2013, music therapy was included in the Norwegian Directorate of Health’s guidelines for the treatment of psychotic disorders for the first time.

"Here in Norway, music therapy isn’t particularly well-established in psychiatric health care yet, but the new guidelines might change that. Music therapy was strongly recommended in the guidelines, which means that it was put on an equal footing with drug treatments and cognitive behaviour therapy," says Mössler.

The Norwegian Directorate of Health’s guidelines state that: "Music therapy promotes recovery, and treatment should start as early as possible in order to reduce negative symptoms. The treatment must be provided by therapists with approved music therapy training."

"We’re working towards making these resources available to our clients. In hospitals they often focus on the fact that you’re ill and somehow broken. We look at what’s working, focusing on what you can do and starting there. Music therapy motivates, stabilises and relieves pressure, therefore giving you the strength to face your emotional problems," says Mössler.

Christian Gold and Mössler are currently working on a new study which will look at the impact music therapy has on children with autism. Nine countries are involved in the research project, which will last four years.

"We need more music therapists in psychiatric health care. I’d like it to be offered in more places. Right now, people don’t know where to go for it. Adults with special needs don’t have anywhere to go," says Mössler.

Gold thinks there should be a more systematic, less random way of deciding who receives music therapy. "At the moment it’s a postcode lottery. If you are mentally ill, in prison, suffering from dementia or a child in care there’s a certain chance you’ll be offered music therapy, but it depends where in the country you live. We need to implement good guidelines based on research simply so that we can reduce the postcode lottery," he says.

More about Uni Research at: www.uni.no