A prescription for better stroke care 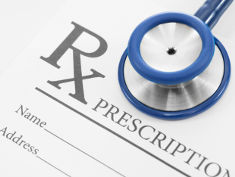 Stroke patients are 70 per cent more likely to continue taking their stroke prevention medications one year later if they have a prescription in hand when discharged; © niyazz/ panthermedia.net

Stroke patients are 70 per cent more likely to continue taking their stroke prevention medications one year later if they have a prescription in hand when discharged – according to researchers at St. Michael's Hospital and the Institute for Clinical Evaluative Sciences (ICES).

Using data from 11 stroke centers, researchers determined how many Ontarians were taking their medications one week, one year and two years after having a stroke. The results reveal the importance of simple interventions, such as giving a prescription to a patient before discharge, to increase short- and long-term stroke prevention.

"The good news is that Ontarians are receiving very good stroke care overall," said Gustavo Saposnik, lead author of the study and director of the Stroke Research Unit of St. Michael's Hospital. "But there are still things we can do to help patients receive better quality, long-term care after a stroke. And the first thing on that list is giving each patient a prescription before he or she leaves as part of discharge planning."

According to the Heart and Stroke Foundation, there are an estimated 50,000 strokes in Canada each year. After having a stroke or minor stroke, the risk of having another stroke is greater. The risk of recurrence, however, can be reduced by more than 80 per cent by following stroke prevention strategies such as rehabilitation and taking medications.

"Patients have other things on their minds after a stroke and it is up to us to give them the tools they need to thrive," said Saposnik.

There are several reasons why a patient might be discharged before receiving a prescription. Doctors may assume their patient will receive a prescription from a family doctor, whom patients are supposed to see within seven days of discharge. Another reason some patients leave without a prescription is that the prescription might be dictated in the chart but not actually delivered to patients.

More about the St. Michael’s Hospital at: www.stmichaelshospital.com