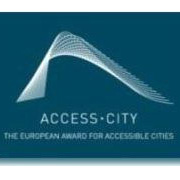 The European Commission does
bestow the European Award for
Accessible Cities; © European
Commission

The European Commission nominates of the “Access City Award” - the European Award for Accessible Cities. The annual prize aims to showcase and reward cities which take exemplary steps to improve their accessibility for people with disabilities in fundamental aspects of city living.

It will highlight the most successful initiatives allowing disabled people to participate fully in society and have equal access to their rights. The Award is part of the EU's wider effort to create a barrier-free Europe. Improved accessibility brings lasting economic and social benefits to cities, especially in the context of demographic ageing. Cities with at least 50,000 inhabitants have until 20 September to submit a nomination.

"Accessibility is a cornerstone of inclusion. Access to infrastructure, goods, services and information is a precondition for disabled people to fully exercise their rights and participate actively in the community," said European Union Justice Commissioner Viviane Reding. "We want to ensure that the doors of our cities are open to everyone. This award honours those which are demonstrating commitment, ambition and innovation to make accessibility a reality in Europe. By sharing experiences, the successes of some cities can be an inspiration to others across Europe".

Approximately 80 million EU citizens have a disability. With the ageing of our society, the number of people with a disability or those with reduced mobility is growing every day. Moreover, with four out of five Europeans living in towns and cities, Europe is now an essentially urban society. Giving everyone access to transport, public spaces and services, and technology has become a real challenge. Providing accessibility also gives economic and social benefits and contributes to the sustainability and inclusiveness of the urban environment.
In line with the United Nations Convention on the Rights of People with Disabilities, accessibility is one of the pillars of the European Union’s Disability Strategy 2010-2020 which aims at creating a barrier-free Europe for all.

The Access City Award was launched for the first time in 2010. Applications came from 66 cities from 19 EU countries. The winning city was Ávila in Spain. The three other Access City finalists were Barcelona (Spain), Cologne (Germany) and Turku (Finland).

The EU Disability Strategy 2010-2020 provides the general framework for action in the area of disability and accessibility at EU level to complement and support.