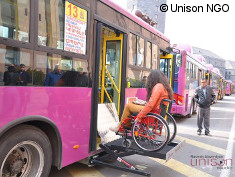 Independent Living activists celebrate a significant success in the capital city of Armenia. February 20, 2015, was the day when the first ten accessible city buses started running in Yerevan.

This achievement is a result of cooperation between DPOs and the Municipality of Yerevan. The issue of accessibility of public transport in Armenia has a long history of lobbying, public actions, negotiations and disappointments. One of ENIL members, Armen Alaverdyan, Executive Director of Unison NGO (CIL-Armenia), has a leading role in this long fight for human rights. His efforts started in 2012 with the initiation of a video campaign which had the aim to persuade the relevant stakeholders that accessible public transport is not only possible, but important too. Results came in the next year (2013) when Yerevan’s Municipality finally took the first steps in the right direction. And finally, on 20th February 2015, Armen Alaverdyan had the pleasure to test the newly bought accessible buses in the presence of DPO representatives and mass media.

Simultaneously, the optimism of DPOs was strengthened by the process of extensive construction of curb ramps in the crossroads of Yerevan. Most importantly, for the first time, the Municipality had consulted with Unison and a few other leading DPOs on the priority venues for the curb ramps and their compliance with international norms. As a result, several hundred curb ramps have been constructed in 2013-2014, most of them ADA compliant.

The future of independent living in Armenia looks hopeful, but still requires active involvement of DPOs and disability activists. Armenia ratified the CRPD (but not the Optional Protocol) in 2010. Hundreds of PWDs have been provided with jobs in the recent years.

Since January 1, 2015, a 3 percent quota became legally binding for state-run employers; next year, a 1 percent binding quota will be enforced in the private sector. The Yerevan city budget for 2015 includes funds for making at least 10 more buses accessible. Additional funding from sources other than the city budget would allow for this process to be accelerated.