Accident and Emergency departments cause problems for the elderly 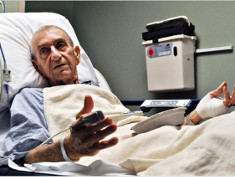 Elderly patients may have complex symptoms and it is often not the most visible symptom i that is the most important in the sequence; © Trinity Health

Norwegian Accident and Emergency departments are not designed for elderly patients, and their staff often lack geriatric experience.

Accident and Emergency (A&E) doctors are often young and inexperienced, with little knowledge or understanding of older patients. This means that patients may sometimes be misdiagnosed. Older patients could be admitted unnecessarily, admitted to the “wrong” department, or discharged with a medical problem that has not been identified and treated. These findings are based on general observations made in a wide number of A&E departments.

St Olav’s Hospital, Vestfold Hospital, Trondheim municipality and SINTEF have all been involved in tackling the problem. They have obtained information from abroad, made observations and conducted surveys, and interviewed patients, relatives and staff.

On the basis of this information, Trondheim municipality and St Olav’s Hospital are now beginning to develop an improved A&E experience for older emergency patients.

When elderly people arrive at A&E, it is often because of an acute illness or accident. However, these patients may have complex symptoms, including chest pains, stomach pains, a tendency to fall, cognitive impairment, dehydration and movement problems. And it is often not the most visible symptom in the elderly that is the most important in the sequence.

Caption: Statistics from St Olav’s show that it takes longer to determine which is the most important symptom to treat in older patients than in younger patients.

Up to 40 percent of older people who come to hospital may be suffering from delirium, and may find a stay in hospital such a strain that this condition becomes worse.

Older people also have problems finding their way around a hospital: Signage may be poor, clocks too small, and in rooms without windows and adequate lighting, patients may lose track of whether it is day or night. It can also often be difficult to have a confidential conversation in A&E.

Senior Adviser Espen H. Aspnes is the innovation consultant for InnoMed in Central Norway. He tells the story of the American “geriatrics guru” Bill Thomas, who started off the whole thing. Thomas started his medical career in A&E, and quickly confirmed that they were not well designed for older patients. His work resulted in changes to the A&E departments in a number of American hospitals.

"We have invited Bill Thomas to Norway to present workshops on two occasions. Both times, his message created a great deal of interest and enthusiasm", says Aspnes. "The participants have understood that in order to provide older people with good treatment that is suitable and safe, it is essential that we have sufficient experience and knowledge about them".

So great was the interest that Senior Consultant Jostein Dale of St Olav’s Hospital decided to take this a step further. He and Aspnes submitted an application for a preliminary project. The objective was to acquire enough knowledge to be able to create an A&E department designed for older people. The preliminary project "A&E for the elderly" began in 2012.

More about SINTEF at: www.sintef.no/Home