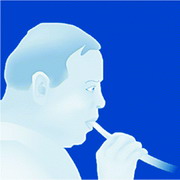 The noninvasive test for MS could
save a lot of costs; © ACS

Scientists are reporting the development and successful tests in humans of a sensor array that can diagnose multiple sclerosis (MS) from exhaled breath.

This might be a fast, inexpensive and non-invasive test for MS - the most common neurological disease in young adults. Hossam Haick and colleagues report that doctors now diagnose MS based on its characteristic symptoms, which include muscle spasms, numbness, coordination problems and slurred speech.

One common tool for confirming the diagnosis and making informed decisions on treatment is magnetic resonance imaging (MRI) of the brain. Another tool is a lumbar puncture or "spinal tap" to analyze the fluid that bathes the brain and spinal cord. But MRI scans are costly, and lumbar punctures are invasive.

"The results presented here open new frontiers in the development of fast, noninvasive and inexpensive medical diagnosis tools for detection of chronic neurological diseases," the scientists stated. "The results could serve as a launching pad for the discrimination between different subphases of stages of multiple sclerosis as well as for the identification of multiple sclerosis patients who would respond well to immunotherapy." A large clinical study with the reported sensors is underway and will be reported in the future.


- More about the American Chemical Society at: www.acs.org