Advantages of E-Books for Older Readers 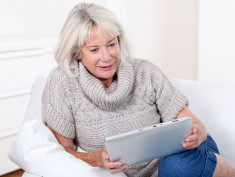 Reading on a tablet PC is easier for older people than reading a printed book; © goodluz/panthermedia.net

Reading electronic books is no more effortful for the brain than reading traditional paper books. To the contrary: Older people actually benefit from reading from a tablet PC. This is the conclusion reached by a study of reading performance among participants from different age groups that was undertaken under by researchers from Johannes Gutenberg University Mainz (JGU) in Germany in collaboration with the universities of Göttingen and Marburg.

"There is a widely-held belief that it is more difficult to read from a digital device and that people retain less of what they read in this case," explains Franziska Kretzschmar of the Department of English and Linguistics at Mainz University. "Our study has shown that older people can actually read better from tablet PCs, likely because of the higher visual contrast."

Electronic books have become ever more popular in recent years, particularly in English-speaking countries, where the sales figures for e-books are outstripping those for conventional printed books. German readers are somewhat more skeptical when it comes to digital texts. Sales of e-books in Germany made up only about one percent of all book sales in
2011 and, when asked about their favorite reading medium, most Germans still tend to vote in favor of printed books rather than e-books. This may, in part, be attributable to a general distrust of new technologies.

The 56 test participants who took part in the study found reading on paper to be more pleasant and claimed that it was easier than reading on digital devices. However, recordings made during the study showed that this view, shared equally by both the younger and older participants, did not correlate with analyses of eye movements and brain wave patterns.
Participants in the age range of 66 to 77 years showed faster reading speeds and less brain activity when reading from a tablet PC compared with a printed book and also when compared with an e-ink reader.

"The cognitive effort required by older to read from a tablet PC was less than that required to read from an e-ink reader or paper pages. This is clearly confirmed by our observations of their eye movements while reading and the results of simultaneous measurements of brain activity," said Kretzschmar. This reduction of cognitive and neural effort may be attributable to the better contrast provided by the background lighting on a tablet computer, which aids letter and word recognition and has an impact even on the highest levels of language processing. However, there was no comparable effect among younger participants in the age range of 21 to 34 years. The results for all three reading media were identical in this cohort. Importantly, regardless of whether the participants were young or old, reading comprehension was the same for all three media in the two groups.

The findings thus demonstrate that people's subjective perception of reading on digital devices does not coincide with the actual cognitive and neuronal effort that needs to be invested in information processing while reading from them, as the researchers from Mainz, Göttingen, and Marburg conclude. The existence of this subjective preference for paper texts may be attributable, at least in part, to the high status afforded to traditional, printed books as part of our cultural heritage.

More about the Johannes Gutenberg University Mainz at: www.uni-mainz.de