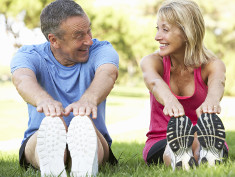 Aerobic exercise may be the first effective treatment for MS patients with memory problems; © Cathy Yeulet/panthermedia.net

A research study headed by Victoria Leavitt and James Sumowski of Kessler Foundation, provides the first evidence for beneficial effects of aerobic exercise on brain and memory in individuals with multiple sclerosis (MS). The study was funded by Kessler Foundation.

Hippocampal atrophy seen in MS is linked to the memory deficits that affect approximately 50 percent of individuals with MS. Despite the prevalence of this disabling symptom, there are no effective pharmacological or behavioral treatments. "Aerobic exercise may be the first effective treatment for MS patients with memory problems," noted Leavitt, research scientist in Neuropsychology & Neuroscience Research at Kessler Foundation. "Moreover, aerobic exercise has the advantages of being readily available, low cost, self-administered, and lacking in side effects." No beneficial effects were seen with non-aerobic exercise. Leavitt noted that the positive effects of aerobic exercise were specific to memory; other cognitive functions such as executive functioning and processing speed were unaffected.

The study's participants were two MS patients with memory deficits who were randomized to non-aerobic (stretching) and aerobic (stationary cycling) conditions. Baseline and follow-up measurements were recorded before and after the treatment protocol of 30-minute exercise sessions 3 times per week for 3 months. Data were collected by high-resolution MRI (neuroanatomical volumes), fMRI (functional connectivity), and memory assessment. Aerobic exercise resulted in a 16.5 percent increase in hippocampal volume, a 53.7 percent increase in memory, and increased hippocampal resting-state functional connectivity. Non-aerobic exercise resulted in minimal change in hippocampal volume and no changes in memory or functional connectivity.

More about the Kessler Foundation at: www.kesslerfoundation.org