African-American Children Tend to Be Diagnosed Later for Autism 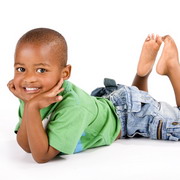 Not every child is going to have
access to medical evaluation;
© panthermedia.net/Harm Kruyshaar

A study by a Florida State University researcher has found that African-American children tend to be diagnosed later than white children, which results in a longer and more intensive intervention.

The reasons for later diagnoses include a lack of access to quality, affordable, culturally competent health care, according to Martell Teasley, an associate professor in Florida State's College of Social Work who has conducted a comprehensive review of research literature on autism and African-American children. In addition, the stigma attached to mental health conditions within the black community contribute to misdiagnoses of autism, and underuse of available treatment services.

"There are no subjective criteria for diagnosing autism. Only brain scans can truly provide appropriate diagnoses, because we are dealing with biological and chemical imbalances in the brain," Teasley said. "Not every child is going to have access to this kind of medical evaluation, particularly those who are indigent and do not have health care funding."

Because of the social stigma, Teasley says that some African-American families might be resistant to accept a diagnosis and treatment. "Less discussion about autism among African-Americans or between African-Americans and health care providers leads to misdiagnoses, a lack of treatment and a lack of services," Teasley said. "This will lead to greater challenges for families — more stress and anxiety, and poorer developmental outcomes."

African-Americans also might resist a diagnosis and treatment because of a mistrust of mainstream health care providers over past discrimination. "African-Americans are well versed in going to a doctor who might have biases or discriminatory practices, so they may not readily accept what a doctor says," Teasley said.

African-Americans live in all types of settings, but the majority live in urban areas, which have seen a decline in the number of mental-health care agencies since the 1980s. "This lack of accessibility causes a problem for some African-Americans," Teasley said.


- More about the Florida State University at: www.fsu.edu