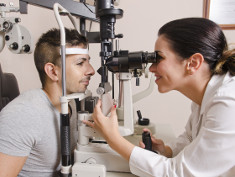 There is a need for improved screening and access to treatments for diabetic macular edema, a leading cause of vision loss; © Antonio Garcia Recena/ panthermedia.net

Research by Keck Medicine of University of Southern California (USC) ophthalmology scientists demonstrates that African Americans bear heavier burden of diabetic macular edema (DME), one of the leading causes of blindness in diabetic patients in the United States.

The research indicates a higher burden of diabetes-related vision loss among certain ethnic populations because of problems with access to care, said corresponding author Rohit Varma, director of the USC Eye Institute and professor and chair of ophthalmology at the Keck School of Medicine of USC.

"We were surprised that our research showed that African Americans have the highest rates of DME, when Hispanics tend to have the highest prevalence of diabetes," said Varma, who is recognized as one of the leading researchers of eye disease in underserved populations. "There is not enough vision screening for DME among diabetics, yet there are much better therapies available that are covered by insurance. We hope that our research will help those in the position to influence policy to get a better handle on costs and where the need for treatment is the greatest."

Diabetic eye disease is one of the leading causes of vision loss in people ages 20-70 years. Approximately 347 million people throughout the world have diabetes mellitus, and the Centers for Disease Control estimates that 25.8 million Americans had diabetes in 2010.

Diabetic macular edema results when fluid and protein accumulates on the macula of the eye, which is part of the retina, causing it to thicken and swell. The victim's central vision is affected and, left untreated, the condition can range from slight blurring to blindness.

Varma's team conducted the study by using the National Health and Nutrition Examination Study (NHANES) database, a national dataset measuring the health and nutritional status of American adults and children. The assessment has been surveying about 5,000 Americans every year since the early 1960s and is used by researchers nationwide to determine the prevalence of major diseases and risk factors for disease.

As part of NHANES, subjects undergo a physical exam that includes photos of their retinas, which Varma's team reviewed to determine the prevalence of DME.

Clinicians should assess diabetes patients, especially those who are African American or Hispanic, more closely for vision loss, Varma advised. He also stated that patients should do everything they can to control their glucose and monitor their own vision. Varma pointed out that August is when we commemorate National Eye Exam Month – a perfect time for ophthalmologists and patients to concentrate on eye health.

Varma's next target for research in this area is examining barriers to access to eye care among African Americans.