After a stroke, poor information increases risk of depression 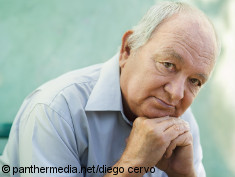 The risks of depression are particularly high for post-stroke survivors who lack support from family or social services; © panthermedia.net/diego cervo

People recovering from a stroke and living at home have generally a higher risk of suffering from depression. According to researchers lack of information is often a major concern for patients and this frequently contributes to their depression. This is the result of a new study from health sociologists of the University of Luxembourg. Depression can worsen existing problems like reduced mobility or damaged mental faculties and harm a patient’s capability to recover.

"Depressive symptoms are known to reduce physical, mental and social abilities, and increase the risk of disability and premature death," observed Michèle Baumann, Professor in Health Sociology at the University of Luxembourg. The risks are particularly high for post-stroke survivors who lack support from family or social services.

The research project, financed by Luxembourg’s National Research Fund, found that a lack of information was often a major concern for post-stroke survivors. In particular there was unease and uncertainty over potential changes in their condition, as well as consequences over the coming months and years. There were also worries about the accuracy and consistency of information received from different sources. A lack of coordination between services was also cited as a concern, and many patients were not sure about what help might be available in the future given different scenarios.

Most vulnerable to depression were lower income earners and those with low-levels of educational achievement. Those who had managed to keep working tended to be in a better mental state. Symptoms of depression included emotional troubles, difficulties with sleep, problems communicating, pain and fatigue.

The data was gathered from 94 patients about 65 years old in the Grand Duchy of Luxembourg who were living at home two years after having suffered from cerebrovascular disease. They participated in structured face-to-face interviews at their home, to complete a questionnaire on their physical and mental health, and their social and care-needs. "The routine measurement of quality of life, patient recovery, and information and care-needs identify situations that can then be treated," added Michèle Baumann. This research could help health care professionals design more effective aid programmes.

More about the University of Luxembourg at: www.uni.lu