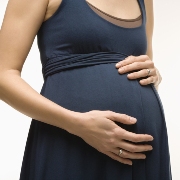 In mothers aged 40 years or more,
the rate of GDM had risen to 1.9
per cent;© panthermedia.net/
Ron Chapple

The study looked at the link between maternal age, BMI and racial origin with the development of GDM and how they interact with each other. Data were collected on 585,291 pregnancies in women attending for antenatal care and delivery at 15 maternity units in North West London from 1988-2000.The study included 1,688 women who developed GDM and 172,632 who did not.

The ORs for GDM development were also significantly higher in the other racial groups but at a younger maternal age (older than 25 years if they were Black Africans or Black Caribbeans and older than 20 years if they were South Asians). Moreover, the rate of GDM rose more rapidly with age. For example, in mothers aged 40 years or more, the rate of GDM had risen to 1.9 per cent in white European mothers (from 0.5 per cent at age 20-24), but to 11.4 per cent in South Asians (from 1.1) and 21.7 per cent in black Africans (from 0.7 per cent). White European women under the age of 20 were the only group to have significantly lower ORs for developing GDM.


- More about Wiley-Blackwell at: www.wiley.com