Air Pollution and Genetics Combine to Increase Risk for Autism 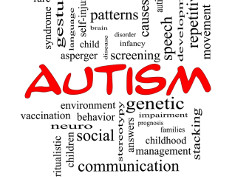 Exposure to air pollution appears to increase the risk for autism among people who carry a genetic disposition for the neurodevelopmental disorder, according to newly published research led by scientists at the Keck School of Medicine of the University of Southern California (USC).

"Our research shows that children with both the risk genotype and exposure to high air pollutant levels were at increased risk of autism spectrum disorder compared to those without the risk genotype and lower air pollution exposure," said the study's first author, Heather E. Volk, assistant professor of research in preventive medicine and pediatrics at the Keck School of Medicine of USC and principal investigator at The Saban Research Institute of Children's Hospital Los Angeles.

Autism spectrum disorder (ASD) is a lifelong neurodevelopmental disability characterized by problems with social interaction, communication and repetitive behaviors. The Centers for Disease Control and Prevention estimates that one in 88 children in the United States has an ASD. ASD is highly heritable, suggesting that genetics are an important contributing factor, but many questions about its causes remain. There currently is no cure for the disorder.

"Although gene-environment interactions are widely believed to contribute to autism risk, this is the first demonstration of a specific interaction between a well-established genetic risk factor and an environmental factor that independently contribute to autism risk," said Daniel B. Campbell, assistant professor of psychiatry and the behavioral sciences at the Keck School of Medicine of USC and the study's senior author. "The MET gene variant has been associated with autism in multiple studies, controls expression of MET protein in both the brain and the immune system, and predicts altered brain structure and function. It will be important to replicate this finding and to determine the mechanisms by which these genetic and environmental factors interact to increase the risk for autism."

The team studied 408 children between 2 and 5 years of age from the Childhood Autism Risks From Genetics and the Environment Study, a population-based, case-control study of preschool children from California. Of those, 252 met the criteria for autism or autism spectrum disorder. Air pollution exposure was determined based on the past residences of the children and their mothers, local traffic-related sources, and regional air quality measures. MET genotype was determined through blood sampling.