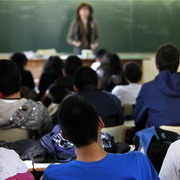 Tics are the most common
movement disorder in children and
young people; © SINC

Experts have confirmed it: tics are not a rare or uncommon disorder. It is the second study to be conducted in Spain to date, and the first of great importance, revealing that the prevalence of these motor disorders in the child population is 16.86 per cent. The incidence is greater in boys than girls, and they tend to disappear or reduce with age.

“Tics are a very common disorder,” explains Esther Cubo, researcher from the Yagüe de Burgos General Hospital. “Before, it was believed to be a rare condition, and since studies were only conducted for people that consulted the doctor, only severe tics were observed. Now we have noticed that most are mild disorders that do not have any functional repercussion.”

Although various epidemiological studies have been conducted, this is the second in Spain, with a larger population size than the first one, which only recorded data in two school centres. This study determines the prevalence of tics in a sample of 1158 school children in the province Burgos, but the authors believe that these figures can be extrapolated to the rest of the Spanish population.
The results reveal that while 16.86 per cent of children in ordinary schools had tics, the number rose to 20.37 per cent in special education centres. In both cases, it was more frequent in boys than girls.

Experts also analysed other related disorders, such as attention deficit disorder. Tics fluctuate and increase in situations of stress, such as family or school problems. The most severe diagnosis were chronic motor tic disorders (6.07 per cent) and Tourette’s syndrome (5.26 per cent).

“There is still a lack of knowledge, even among medical staff, as to why diagnosing tics has to be associated with coprolalia –insults, swear words,” highlights Cubo. “In fact, it is classified as being a rare disease, but we have to consider it as being common so that it is diagnosed correctly.”


- More about the Yagüe de Burgos General Hospital at: www.hgy.es