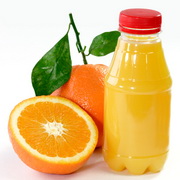 Vitamin C may stop some negativ
effects in the brain;
© panthermedia.net/Heike Brauer

Researchers at Lund University have discovered a new function for vitamin C. Treatment with vitamin C can dissolve the toxic protein aggregates that build up in the brain in Alzheimer's disease.

The brains of people with Alzheimer's disease contain lumps of so-called amyloid plaques, which consist of misfolded protein aggregates. They cause nerve cell death in the brain and the first nerves to be attacked are the ones in the brain's memory centre.

"When we treated brain tissue from mice suffering from Alzheimer's disease with vitamin C, we could see that the toxic protein aggregates were dissolved. Our results show a previously unknown model for how vitamin C affects the amyloid plaques", says Katrin Mani, reader in Molecular Medicine at Lund University.

"Another interesting finding is that the useful vitamin C does not need to come from fresh fruit. In our experiments, we show that the vitamin C can also be absorbed in larger quantities in the form of dehydroascorbic acid from juice that has been kept overnight in a refrigerator, for example".

There is at present no treatment that cures Alzheimer's disease, but the research is aimed at treatments and methods to delay and alleviate the progression of the disease by addressing the symptoms.

That antioxidants such as vitamin C have a protective effect against a number of diseases, from the common cold to heart attacks and dementia, has long been a current focus of research.

"The notion that vitamin C can have a positive effect on Alzheimer's disease is controversial, but our results open up new opportunities for research into Alzheimer's and the possibilities offered by vitamin C", says Mani.


- More about the Lund University at: www.lunduniversity.lu.se