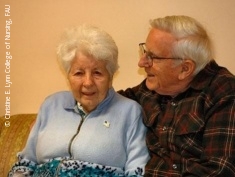 In a study conducted at the Christine E. Lynn College of Nursing at Florida Atlantic University (FAU), researchers looked at how couples affected by Alzheimer’s disease AD maintained their relationships, over the course of many years of marriage, and uncovered 10 patterns of communication that help couples sustain engagement in their relationships.

Findings from the study are published in the current issue of the International Journal of Human Caring in an article titled "Maintaining Caring Relationships in Spouses Affected by Alzheimer's Disease".

Christine L. Williams, DNSc, author of the publication and professor and director of the Ph.D. in Nursing Program in FAU's College of Nursing, is a board-certified clinical nurse specialist in adult psychiatric mental health nursing, and designed a first-of-its-kind program to study caregiver-spouse interactions.

"There is a knowledge gap regarding how couples affected by Alzheimer's disease manage their relationship to sustain hope, connection, meaning and engagement," said Williams. "Instead of focusing our study on what wasn't working in their relationships, we looked at patterns that support intimacy. There is a pressing need for research on maintaining a caring relationship despite progressive decline as it may lead to interventions to foster constructive communication."

In the study, Williams used Jean Watson's caritas framework, which values the human relationship as the central focus and provides the appropriate framework to study caregiver-spouse interactions. Members of Williams' research team visited 15 couples in their home once a week for 10 weeks. Couples had long-term marriages with an average of 47 years, were middle-income and generally well educated. The mean age for caregivers was 77 and 80 for spouses with AD. Most of the caregivers were female (68.8 percent) and reported that they had performed the role of caregiver for an average of four years.

Couples were asked to converse on a topic of their choice for 10 minutes, which were recorded once the researcher left the room. Using this method, researchers were able to observe naturally occurring everyday conversations, which involved both verbal and non-verbal behavior and non-linguistic aspects of the conversation such as pauses.

Thirty conversations were analyzed with qualitative methods. Three overall themes of spousal care were identified: engaging with compassion; patiently reaching out; and trusting in the existence of deep attachment. In addition, 10 communication patterns were identified. Communication patterns included "news of the day", which provided caregivers and spouses normalcy and serenity by talking about the mundane activities of daily life; "sharing memories", whereby caregivers attempted to reminisce with their spouses about memories of people and past events; "storytelling", as caregivers persevered in telling a detailed story although the conversation seemed like a monologue with no verbal participation from the spouses; and "delighting in the unexpected", as caregivers were overjoyed when their spouses contributed more to the conversation than expected. The researchers also observed that caregivers accepted a spouse's version of the story, valuing the relationship more than being right and therefore refrained from interrupting or interjecting.

"It was evident that caregiving spouses bore most of the responsibility in maintaining the caring relationship, but there was evidence that the spouse affected by Alzheimer's disease actively participated as well," said Williams. "In one conversation, maintaining eye contact with the spouse was the only obvious evidence of engagement. In another interaction, singing familiar songs provided an avenue for active involvement between partners."

More than 5 million Americans are currently affected by Alzheimer's disease and 15.4 million caregivers are responsible for their care. Most caregivers report significant stress and decreased well-being related to caregiving and evidence is mounting that they have increased morbidity and mortality rates. The largest proportion of AD family caregivers are spouses.

"These caring ways of relating are of value because they provide information about what is possible in marital relationships affected by Alzheimer's disease," said Williams. "Illuminating ways that couples demonstrate caring can be a source of strength to those who feel hopeless, discouraged and ready to give up, and can empower nurses to reach out to couples."

More about the Florida Atlantic University at: www.fau.edu