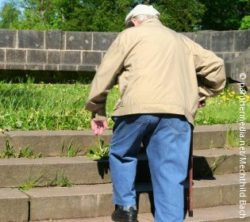 The findings are based on the MEDALZ study, including all community-dwellers of Finland who received a clinically verified diagnosis of Alzheimer's disease in 2005-2011 and had no history of previous hip fracture (N=67,072) and a matched cohort of persons without Alzheimer's disease.

Previously, many risk factors for hip fracture, including dementia, had been identified. It was not known whether the same factors predict hip fracture risk in persons with and without Alzheimer's disease, which is the most common form of dementia. However, it is known that the consequences of hip fracture are even more devastating for a person with dementia.

The new findings underline the importance of developing and implementing preventive interventions that are suitable for persons with dementia. Different preventive interventions such as exercise, medications, home safety assessment and modification interventions, as well as medication reviews have already been proposed but few studies have explored the applicability of these measures to persons with dementia. Regular assessments of medication are one feasible approach, as an association was found between various medications and hip fracture risk.