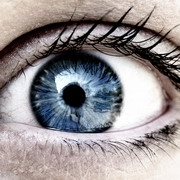 Blindness is often caused by
diseases of the retina that kill
the photoreceptors;© Paul Heubeck/
panthermedia.net

Two researchers at Weill Cornell Medical College have deciphered a mouse's retina's neural code and coupled this information to a novel prosthetic device to restore sight to blind mice.

The researchers say they have also cracked the code for a monkey retina and hope to quickly design and test a device that blind humans can use.

The lead researcher, Sheila Nirenberg envisions a day when the blind can choose to wear a visor, similar to the one used on the television show Star Trek. The visor's camera will take in light and use a computer chip to turn it into a code that the brain can translate into an image.

"It is an exciting time. We can make blind mouse retinas see, and we are moving as fast as we can to do the same in humans," says Nirenberg. "This is the first prosthetic that has the potential to provide normal or near-normal vision because it incorporates the code."

Normal vision occurs when light falls on photoreceptors in the surface of the retina. The retinal circuitry then processes the signals from the photoreceptors and converts them into a code of neural impulses. These impulses are then sent up to the brain by the retina's output cells, called ganglion cells. The brain understands this code of neural pulses and can translate it into meaningful images. Blindness is often caused by diseases of the retina that kill the photoreceptors and destroy the associated circuitry, but typically, in these diseases, the retina's output cells are spared.

"Not only is it necessary to stimulate large numbers of cells, but they also have to be stimulated with the right code — the code the retina normally uses to communicate with the brain," says Nirenberg.

In a eureka moment, while working on the code for a different reason, Nirenberg realized that what she was doing could be directly applied to a prosthetic. She and her students immediately went to work on it. They implemented the mathematical equations on a "chip" and combined it with a mini-projector. The chip, which she calls the "encoder" converts images that come into the eye into streams of electrical impulses, and the mini-projector then converts the electrical impulses into light impulses. These light pulses then drive the light-sensitive proteins, which have been put in the ganglion cells, to send the code on up to the brain.

The entire approach was tested on the mouse. The researchers built two prosthetic systems — one with the code and one without. "Incorporating the code had a dramatic impact," Nirenberg says. "It jumped the system's performance up to near-normal levels — that is, there was enough information in the system's output to reconstruct images of faces, animals — basically anything we attempted."


- More about the New York-Presbyterian at: www.nyp.org