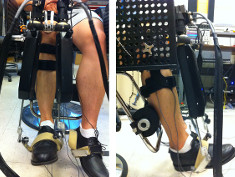 Data collected with the Anklebot could aid in rehabilitation from strokes and other motor disorders; © Hyunglae Lee

For most healthy bipeds, the act of walking is seldom given a second thought: One foot follows the other, and the rest of the body falls in line, supported by a system of muscle, tendon, and bones. Now, researchers have measured the stiffness of the ankle in various directions using a robot called the Anklebot.

"Imagine you have a collection of pebbles, and you wrap a whole bunch of elastic bands around them," says Neville Hogan, the Sun Jae Professor of Mechanical Engineering at MIT. "That's pretty much a description of what the ankle is. It's nowhere near a simple joint from a kinematics standpoint."

The robot is mounted to a knee brace and connected to a custom-designed shoe. As a person moves his ankle, the robot moves the foot along a programmed trajectory, in different directions within the ankle's normal range of motion. Electrodes record the angular displacement and torque in specific muscles, which researchers use to calculate the ankle's stiffness.

From their experiments with healthy volunteers, the researchers found that the ankle is strongest when moving up and down, as if pressing on a gas pedal. The joint is weaker when tilting from side to side, and weakest when turning inward.

Interestingly, their measurements indicate that the motion of the ankle from side to side is independent of the ankle's up and down movement. The findings, Hogan notes, may help clinicians and therapists better understand the physical limitations caused by strokes and other motor disorders.

Hogan and Hermano Krebs, a principal research scientist in MIT's Department of Mechanical Engineering, developed the Anklebot as an experimental and rehabilitation tool. Much like MIT-Manus, a robot they developed to improve upper-extremity function, the Anklebot is designed to train and strengthen lower-extremity muscles in a "cooperative" fashion, sensing a person's ankle strength and adjusting its force accordingly.

The team has tested the Anklebot on stroke patients who experience difficulty walking. In daily physical therapy sessions, patients are seated in a chair and outfitted with the robot. Typically during the first few sessions, the robot does most of the work, moving the patient's ankle back and forth and side to side, loosening up the muscles, "kind of like a massage," Hogan says. The robot senses when patients start to move their ankles on their own, and adapts by offering less assistance.

"The key thing is, the machine gets out of the way as much as it needs to so you do not impose motion," Hogan says. "We don't push the limb around. You the patient have to do something."

Many other robotic therapies are designed to do most of the work for the patient in an attempt to train the muscles to walk. But Hogan says such designs are often not successful, as they impose motion, leaving little room for patients to move on their own. "Basically you can fall asleep in these machines, and in fact some patients do," Hogan says. "What we're trying to do with machines in therapy is equivalent to helping the patients, and weaning them off the dependence on the machine. It's a little bit like coaching."

In their most recent experiments, the researchers tested the Anklebot on 10 healthy volunteers to characterize the normal mechanics of the joint. Understanding the mechanics of the ankle in healthy subjects may help therapists identify abnormalities in patients with motor disorders.

More about the Massachusetts Institute of Technology at: www.web.mit.edu