App to help elderly people get around on public transport 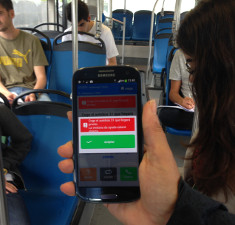 The app is supposed to advice elderly people how to get around in an accessible way with public transport; © Tecnalia

Getting around in a town or city is a necessity in order to carry out everyday tasks. However, knowing which is the most convenient bus to get to the centre or when you have to change buses is not always a straightforward task. This is now much easier for elderly people because the Tecnalia research centre has produced an app that offers the best alternative for each stretch by providing clear, straightforward information.

It is an app available for computers and smart phones and all the user has to do is input a starting point and a destination. On the screen the tool instantly displays the best alternative plus details about the public transport that has to be taken, as well as precise instructions as to whether it is necessary to change to a different route or means of transport.

The assistant also tells the user how long the trip will take, when he/she has to get off and even warns about possible incidents that could take place along the way, thus helping him/her to adapt his/her trip in real time. That way, if necessary, the users can avoid having to negotiate stairs or other architectural barriers that could hamper their progress.

The project, currently in its development phase, has been successfully tested by users between the ages of 65 and 90 in Donostia-San Sebastian, Helsinki (Finland) and Vienna (Austria). To test the app, Tecnalia had the collaboration of DBUS, the Tram Company of Donostia-San Sebastian which offers travellers in the city a scheduled public transport service.

This tool is part of a European project led by Tecnalia. It has the participation of Citruna Technologies OY (Finland), E-Seniors (France), Fara OY (Norway), Transport & Travel Research Ltd (United Kingdom), the University of Vienna (Austria), VTT Technical Research Centre of Finland (Finland), Fara (Finland) and IN2, as a subcontracted partner (United Kingdom). The final app is expected to be ready in 2015 when public bodies like town and city councils and provincial councils as well as private organisations will be able to incorporate it into their regular services.

More about Elhuyar Fundazioa at: www.basqueresearch.com