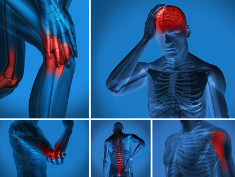 Research is ongoing to try and understand more about the reasons why patients with arthritis may not always take their medications as prescribed; © Wavebreakmedia ltd/ panthermedia.net

Large numbers of people with severe rheumatoid arthritis are failing to take expensive medication as prescribed, according to a new multi-centre study led by researchers in Manchester.

Twenty seven per cent of rheumatoid arthritis patients in the study who were on a class of drugs known as anti-TNF therapies did not take them as prescribed in the first six months. Patients from Manchester Royal Infirmary were among those from 60 hospitals around the UK involved in the study.

Researchers from the Arthritis Research UK Centre for Genetics and Genomics at The University of Manchester, who led the study, warned that failure to take the drugs correctly, known as 'non-adherence', reduced their effectiveness and may lead to a worsening of patients’ disease.

One of the study’s authors, Kimme Hyrich, reader in rheumatology at The University of Manchester and honorary consultant at Manchester Royal Infirmary added: "If patients do not take their medication as prescribed it is likely to have a significant effect on whether they respond to therapy and could mean that their condition deteriorates more quickly affecting their quality of life. Non-adherence is also a waste of scarce healthcare resources and something that needs to be addressed."

It is not clear from the study whether patient’s non-adherence was deliberate or accidental, but for many patients with this chronic disease, it is expected that they will need to remain on these therapies for many years. Research is ongoing to try and understand more about the reasons why patients with arthritis may not always take their medications as prescribed.

Rheumatoid arthritis affects around 400,000 people in the UK and is caused by the body’s immune system turning on itself, leading to inflammation pain and swelling in the joints and other internal organs.

The development by Arthritis Research-funded scientists of biologic drugs such as anti-TNF therapy, which block the tumour necrosis factor (TNF) pathway in the inflammatory process that causes rheumatoid arthritis has revolutionised treatment worldwide in the past 10-15 years, and transformed the lives of millions of patients.

Alan Silman, medical director of Arthritis Research UK, said: "Anti-TNF drugs have transformed the lives of a substantial number of patients with rheumatoid arthritis and related disorders. This success has been at a considerable cost to the NHS but there was always the assumption that patients prescribed these drugs will have the necessary regular injections. The fact that a considerable proportion of patients are missing doses of these very expensive agents is worrying, as clearly their effectiveness would be reduced."

Researchers collected adherence data for 286 patients attending 60 rheumatology clinics across the UK between 2008 and 2012 who had rheumatoid arthritis for seven years. Of these, 27 per cent reported non-adherence to biologic therapy according to the defined criteria at least once over the first six-month period.

Self-reported non-adherence, defined as whether a dose of anti-TNF therapy is taken on the day agreed with the health professional, was recorded at three and six months.

The study captured data from patients attending 60 different hospitals across the UK and was funded by Arthritis Research UK and the Manchester National Institute for Health Research Manchester Musculoskeletal Biomedical Research Unit.