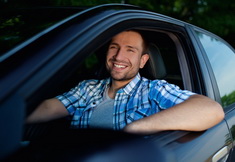 The accident rate for drivers with MS is
estimated to be three times higher than that
of similarly aged healthy individuals;
© Bartlomiej Szewczyk/panthermedia.net

A simple, accurate testing protocol to determine driving fitness in individuals with multiple sclerosis is the aim of a three-year study at Georgia Health Sciences University (GHSU).

Abiodun Akinwuntan, Interim Associate Dean for Research in the GHSU College of Allied Health Sciences, has received a $360,000 grant from the National Multiple Sclerosis Society for phase one of a double-site study. Recruitment is underway for 90 participants at the GHSU Multiple Sclerosis Clinic in Augusta and an equal number at the Andrew C. Carlos MS Institute at the Shepherd Center in Atlanta.

"Multiple sclerosis is a progressive neurological disease that affects the ability to drive. In the early stages, it is possible for some patients to remain safe drivers; however, it is only a matter of time before the disease progresses to a level where driving is unsafe," said Akinwuntan, Associate Professor of Physical Therapy, Neurology and Ophthalmology and Director of the GHSU Driving Simulation Laboratory.

The accident rate for drivers with MS is estimated to be three times higher than that of similarly aged healthy individuals, said Akinwuntan.

In an earlier study, Akinwuntan assessed 50 patients with relapsing-remitting MS, the most common of four types, and determined that just five specific fitness-to-drive tests could predict pass or fail outcomes on a road test with 91 percent accuracy.
Current practices administer 15 to 22 tests that last up to three hours and cost as much as $450. The five psychometric off-road tests can be given in less than 45 minutes for approximately $150.

The new study hopes to validate those findings by including patients with all four types of MS, expanding the number of subjects to 180, and narrowing participation to those who score between 3 and 7 on the Expanded Disability Status Scale.

"Studies have shown that typically those who score below 2.5 are relatively good drivers and those above 7 are not to fit to drive," Akinwuntan said. "So we are concentrating on those people in the middle who are starting to experience deficits that would affect their driving."

A planned second phase of the NMSS study will focus on drivers' training. Running concurrent with phase one is a supplementary study funded by an Extramural Success Award from the GHSU Research Institute to compare driving simulation training with Wii-based exercise training to determine the more effective treatment. Dr. Miriam Cortez-Cooper is co-investigator.

Phase-one study participants will be tested for up to four hours over two days. The supplemental training study will last five weeks. "The earlier drivers incorporate intervention training, the longer they will be able to stay on the road and maintain independence," Akinwuntan said.

An interdisciplinary GHSU pilot study is also testing the same program on patients with age-related macular degeneration. Akinwuntan has had success with similar programs for stroke patients and individuals with Parkinson's disease.


- More about the Georgia Health Sciences University at: www.georgiahealth.edu