At Six Month Children with and without Autism Develop the Same 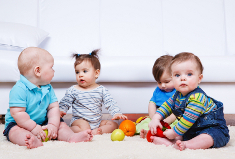 Until the age of six month children with
autism develope much like children without
autism; © panthermedia.net/Anatoliy Samara

That's the main finding of the largest prospective, longitudinal study to date comparing children with early and later diagnosis of ASD with children without ASD. The study sought to learn more about the patterns of development during the first three years of life in children with and without ASD to better understand how ASD can be detected as early as possible. It is the first prospective study to examine early-onset ASD (by 14 months) and later-onset ASD (after 14 months) over the first three years, pinpointing where development looks the same and where it diverges. ASD comprises a group of disorders of brain development that affects about 1 in 88 American children.

Researchers looked at 235 primarily White children with and without an older sibling with autism, testing them at regular intervals from ages 6 to 36 months. Using standardized and play-based assessments, they tested children's fine motor skills, understanding of spoken language, and spoken language production skills. They also measured how often the children shared their emotions and initiated communication with others.

"Results show that ASD has a preclinical phase when detecting it may be difficult," explains Rebecca Landa, the study's lead author. "In some children with ASD, early signs of developmental disruption may not be ASD-specific. "Routinely administering general developmental screeners, such as the Ages and Stages Questionnaire, should begin in infancy, complemented by ASD-specific screeners by 14 months," suggests Landa.

"Screening should be repeated through early childhood. If concerning signs of delay associated with ASD are observed in a child who scores normally on standardized tests, further assessment is warranted."


- More about Society for Research in Child Development at: www.srcd.org