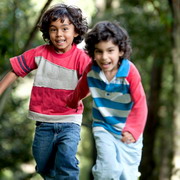 Many Hispanic children with
developmental delays may not be
getting the services they need;
© panthermedia.net/Andres
Rodriguez

The results lead the study authors to recommend increased public health efforts to improve awareness, especially among Hispanics, about the indicators of developmental delay and autism.

Developmental delay is diagnosed in children who lag behind others in reaching important mental or physical milestones, while autism is characterized by deficits in social interactions and communication behaviors. The symptoms of both disorders can be improved with targeted interventions, with the greatest improvements seen when interventions begin early in life.

In conducting the study, the researchers used data from the Childhood Autism Risk from Genetics and the Environment (CHARGE) Study, a population-based study of factors that increase risk for autism or developmental delay. The current study included 1,061 children living in California who were between 24 and 60 months of age. They were divided into three groups: children with autism, children with developmental delay but not autism, and children with typical development. All diagnoses were confirmed or changed based on evaluations by MIND Institute clinicians.

"Our goal was to use the CHARGE Study to help fill the gaps in research on autism for Hispanics so we can better understand what autism is like for this growing U.S. population," said Irva Hertz-Picciotto, professor of public health sciences. "No other study of autism has included such a large proportion of Hispanic children."

When the outcomes for Hispanic children were compared to non-Hispanic children, the results revealed more similarities than differences in terms of autism profiles, including diagnostic scores, language function, whether or not children lost acquired skills and overall intellectual, social and physical functioning.


- More about the University of California - Davis Health System at: www.ucdmc.ucdavis.edu