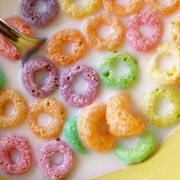 A gluten-free and casein-free diet
does not allow cornflakes, but
should be strictly followed;
© T. McAllister/panthermedia.net

"Research has shown that children with ASD commonly have GI [gastrointestinal] symptoms," said Christine Pennesi, medical student at Penn State College of Medicine. "Notably, a greater proportion of our study population reported GI and allergy symptoms than what is seen in the general pediatric population. Some experts have suggested that gluten- and casein-derived peptides cause an immune response in children with ASD, and others have proposed that the peptides could trigger GI symptoms and behavioral problems."

The team which included Laura Cousino Klein, associate professor of biobehavioral health and human development and family studies, asked 387 parents or primary caregivers of children with ASD to complete a 90-item online survey about their children's GI symptoms, food allergy diagnoses, and suspected food sensitivities, as well as their children's degree of adherence to a gluten-free, casein-free diet.

Pennesi and Klein and their team found that a gluten-free, casein-free diet was more effective in improving ASD behaviors, physiological symptoms and social behaviors for those children with GI symptoms and with allergy symptoms compared to those without these symptoms. Specifically, parents noted improved GI symptoms in their children as well as increases in their children's social behaviors, such as language production, eye contact, engagement, attention span, requesting behavior and social responsiveness, when they strictly followed a gluten-free, casein-free diet.

According to Klein, autism may be more than a neurological disease – it may involve the GI tract and the immune system.

"There are strong connections between the immune system and the brain, which are mediated through multiple physiological symptoms," Klein said. "A majority of the pain receptors in the body are located in the gut, so by adhering to a gluten-free, casein-free diet, you're reducing inflammation and discomfort that may alter brain processing, making the body more receptive to ASD therapies."

The team found that parents who eliminated all gluten and casein from their children's diets reported that a greater number of their children's ASD behaviors, physiological symptoms and social behaviors improved after starting the diet compared to children whose parents did not eliminate all gluten and casein. The team also found that parents who implemented the diet for six months or less reported that the diet was less effective in reducing their child's ASD behaviors.

"While more rigorous research is needed, our findings suggest that a gluten-free, casein-free diet might be beneficial for some children on the autism spectrum," Pennesi said. "It is also possible that there are other proteins, such as soy, that are problematic for these children."


- More about Penn State at: http://live.psu.edu