Autistic Children Have Different Bacteria in the Gut 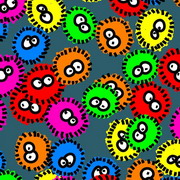 Bacteria in the gut of autistic
children are different from non-
autistic children;
© panthermedia.net/Dawn Hudson

Researchers of the Mailman School of Public Health at Columbia University find that many children with autism harbour a type of bacteria in their guts that non-autistic children do not.

The underlying reason autism is often associated with gastrointestinal problems is an unknown, but new results reveal that the guts of autistic children differ from other children in at least one important way: many children with autism harbour a type of bacteria in their guts that non-autistic children do not.

Earlier work has revealed that autistic individuals with gastrointestinal symptoms often exhibit inflammation and other abnormalities in their upper and lower intestinal tracts. However, scientists do not know what causes the inflammation or how the condition relates to the developmental disorders that characterise autism. The research results indicate the communities of microorganisms that reside in the gut of autistic children with gastrointestinal problems are different than the communities of non-autistic children. Whether or not these differences are a cause or effect of autism remains to be seen.

Bacteria belonging to the group Sutterella represented a relatively large proportion of the microorganisms found in 12 of 23 tissue samples from the guts of autistic children, but these organisms were not detected in any samples from non-autistic children. Why this organism is present only in autistic kids with gastrointestinal problems and not in unaffected kids is unclear.

"Sutterella has been associated with gastrointestinal diseases below the diaphragm, and whether it's a pathogen or not is still not clear," explains Jorge Benach of the Department of Microbiology at Stony Brook University. "It is not a very well-known bacterium."

In children with autism, digestive problems can be quite serious and can contribute to behavioural problems, making it difficult for doctors and therapists to help their patients. Autism, itself, is poorly understood, but the frequent linkage between this set of developmental disorders and problems in the gut is even less so.

Benach says the study was uniquely powerful because they used tissue samples from the guts of patients. "Most work that has been done linking the gut microbiome with autism has been done with stool samples," says Benach, but the microorganisms shed in stool don't necessarily represent the microbes that line the intestinal wall. "What may show up in a stool sample may be different from what is directly attached to the tissue," he says.


- More about the American Society for Microbiology at: www.asm.org