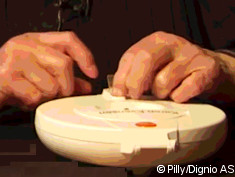 Users with a stable psyche and only moderate cognitive impairment report a greater feeling of freedom when medication visits are stopped; © Pilly/ Dignio AS

Sixteen elderly people in a Norwegian municipality have been testing an automatic drug dispenser at home in their living rooms. Results include increased feelings of empowerment, time saved by the home care services, and fewer medication errors.

Users who tested the automatic drug dispensers ranged in age from 68 to 96 and exhibited a variety of disabilities such as paralysis, reduced motor function and visual and cognitive impairments.

"Users with a stable psyche and only moderate cognitive impairment report a greater feeling of freedom when medication visits are stopped", says SINTEF researcher Ingrid Svagård. "In contrast, others feel that visits from municipal home care workers provide them with a sense of security, and feel insecure when they stop", she says.

Electronic drug dispensers are just one component of the multi-faceted concept known as "welfare technology". The idea behind such initiatives is to improve quality of life for the elderly and make health care services more efficient.

It's a demanding job for the home care services to complete all their scheduled home medication visits to registered users. Medication errors, involving either a failure to medicate or medication given at the wrong time, are among the most common non-conformances reported.

For this reason, Bærum municipality wanted to investigate whether automatic home drug dispensers might be an effective system of improving aspects of their current medication services.

Products currently on the market fall into two categories. The first involves individual doses of pills placed in compartments or beakers. The second is the multidose system in which doses of pills are packed in rolls inside dispensers.

Bærum municipality purchased 10 Pilly dispensers in 2013. The pills are arranged in a "carousel" system containing 28 chambers, and users are notified of the time for their medication by means of a sound or light signal. If the pills have not been taken at the scheduled time an SMS is sent to a pre-defined telephone number.

According to Svagård, reaping the benefits of home drug dispensers depends on a number of different factors. "Experience tells us that obtaining an overall knowledge of the users is essential", she says. "If a user is to obtain any benefit from the Pilly dispenser, he or she must be aware of, and understand, exactly how it works. It is also important that the dispenser is individually adapted to the person using it. For example, some users will need more time than others to take their medicine.

For many, it isn't the sound signals and reminders that matter most. On the contrary, they keep their eyes on the clock and feel that the signals are stressful. Svagård says that during testing a number of problems have occurred which have provided challenges both for the municipal employees and the users. Mistakes have commonly been linked to misuse or heavy-handed treatment of the dispenser.

The pilot project has taught Bærum municipality that dispensers such as Pilly provide major opportunities for more accurate medication and at the same time help to reduce home visits. "The use of a dispenser ensures that the correct medication is taken at the correct time, and thus contributes towards improving the user's health", says Svagård. And this in turn promotes a sense of security for the users, their next of kin and the municipality", she says.