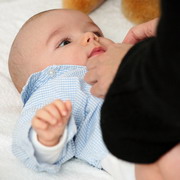 Infants at seven to nine months are
able to slice up the flow of events;
© panthermedia.net/Murat Subatli

Watching children on the playground, we see them run, climb, slide, get up, and do it all again. While their movements are continuous, we language-users can easily divide them up and name each one. But what about people - babies - who do not yet have words? How do they make sense of a world in motion?

An upcoming study finds that infants at seven to nine months are able to slice up the flow of events, even before they start to speak. And the researchers believe they’ve identified the way that babies accomplish this feat.

Infants use “statistical learning”— they compute the likelihood that one event follows another and use that information to predict future events, says Sarah Roseberry of the Institute for Learning & Brain Sciences at the University of Washington. Based on these probabilities, infants find boundaries between events, a critical step for learning words.

In the experiment, 20 babies, half girls and half boys, watched a 4-minute video of 12 hand motions - such as crossed arms, palms together, or arms parallel - performed by a man whose face was blurred to filter out his eyes and emotions. The motions were performed continuously, with units of three hand motions always appearing together (crossed, palms, parallel). After they watched the video of continuous motion, the infants were shown videos of the hand motion units exactly as they’d seen them before (crossed, palms, parallel) or with the transitions between motions re-spliced at different points (circle, crossed, palms).

The experiment used the well-known fact that babies’ gaze can tell you a lot about how they perceive things. In this case, the researchers watched for distinctions between familiar and novel movements. As expected, the babies looked significantly longer at the familiar videos - that is, the events that followed the statistical probabilities they’d learned - than at the re-spliced sequences.

Other research has shown that babies use statistics to find the boundaries between syllables in the language they hear, and that they track probabilities in series of static pictures - say, a triangle, a diamond, and a square. But this study is the first to observe statistical learning with “continuous, dynamic events,” say the authors.

Roseberry says the work adds to a growing understanding of the earliest building blocks of language. “Although these babies were between just 7 and 9 months of age, they were already dividing the world into events” using the “tool” of statistical learning. “It is these events that will be named with words,” she continues. “A few months later, when they can hook up words to the events they see, they will begin to use language.”


- More about the University of Washington at: www.washington.edu