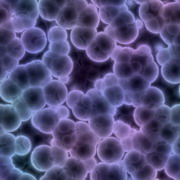 The bacteria in the intestines
outnumber human cells 10-to-1;
© panthermedia.net/rustyphil

The billions of bugs in our guts have a newfound role: regulating the immune system and related autoimmune diseases such as rheumatoid arthritis, according to researchers at Mayo Clinic and the University of Illinois at Urbana-Champaign.

Larger-than-normal populations of specific gut bacteria may trigger the development of diseases like rheumatoid arthritis and possibly fuel disease progression in people genetically predisposed to this crippling and confounding condition, say the researchers.

"A lot of people suspected that gut flora played a role in rheumatoid arthritis, but no one had been able to prove it because they could not say which came first — the bacteria or the genes," says senior author Veena Taneja. "Using genomic sequencing technologies, we have been able to show the gut microbiome may be used as a biomarker for predisposition."

The roughly 10 trillion cells that make up the human body have neighbours: mostly bacteria that often help, training the immune system and aiding in digestion, for example. The bacteria in the intestines, in addition to a relatively small number of other microorganisms (the gut microbiome), outnumber human cells 10-to-1.

Nearly 1 per cent of the world's population has rheumatoid arthritis, a disease in which the immune system attacks tissues, inflaming joints and sometimes leading to deadly complications such as heart disease. Other diseases with suspected gut bacterial ties include type I diabetes and multiple sclerosis.

Researchers say that identifying new biomarkers in intestinal microbial populations and maintaining a balance in gut bacteria could help physicians stop rheumatoid arthritis before it starts.