Barking up the wrong tree with your head in the clouds 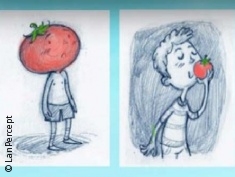 One of the LanPercept tests participants’ interpretation of the idiom “You are a tomato!”. The cartoon shows four choices; participants must choose one of the choices they feel best illustrates the idiom; © LanPercept

How do children and young adults with autism spectrum disorders (ASD) understand idioms and other figures of speech? A EU project based out of the Norwegian University of Science and Technology is examining the links between language and perception in autistic individuals as just one of 15 cross-disciplinary projects designed to bring a better understanding to how our perception and language interact and change over time and in individuals.

If someone said you were "barking up the wrong tree", would you look around for a tree and wonder why that person thought you were barking? What if someone told you that you "had your head in the clouds"? Would you feel your head or look around for clouds? In all of these cases, probably not.

But if you were someone with high-functioning autism, you might very well look around for a tree, or for clouds, or feel for your head. Now, researchers from a major EU 4.15 million euro Marie Curie Initial Training Network called "LanPercept" and coordinated out of the Norwegian University of Science and Technology’s (NTNU) Department of Language and Literature Studies, are studying links between language and perception in people with autism spectrum disorders (ASD).

The study is just one of 15 different projects being pursued by LanPercept researchers, who are drawn from eight universities across Europe and whose expertise includes neuroscience, developmental psychology,linguistics and technology development. Participating in the project are also two teams from the private sector, an eye-tracking company and a neurorehabiltation institution.

"The (LanPercept) network is unique in bridging together basic research and clinical research with a strong focus on methodology and advanced techniques for studying language and perception," says Mila Vulchanova, a professor and director of NTNU’s Language Acquisition and Language Processing Lab and LanPercept coordinator. "This is a must for the European researcher of the future."

The projects range from studying spatial language and non-linguistic spatial abilities in healthy adults and patients with Alzheimer’s disease to examining how children develop an understanding of pronouns that are ambiguous. The ASD research is being conducted by Sobh Chahboun, one of 11 "Early Stage Research Fellows" funded by LanPercept and one of two based at NTNU.

One of tests the team is using to measure language and perception in the two groups involves showing participants a specific idiom, such as "you are a tomato," a phrase used in Spanish to remark on a person’s sunburned complexion.

The test first shows each participant the idiom as words on a computer screen, and then the words in context, presented either visually or as spoken language. Study participants are then asked to click on an image that reflects the meaning of the expression. In the case of the tomato idiom, the hand-drawn pictures show a choice of a person with a head that is literally a tomato, a person smelling a tomato, a person with red spots on her face, and a person with sunburn.

It’s likely clear to you that the meaning of the idiom is the last image, a person with a sunburn. But for ASD study participants, this selection was not immediately obvious, and they erred in their choice more than 50 percent of the time. They also struggled longer to make their decisions than the control group of typically developing youths did.

The research team hopes this research will advance our current knowledge of the cognitive and linguistic profiles of autistic individuals and can help improve the way parents and educators who work with children with autism communicate with them. "We have to be careful how we present information to children from this group," Chahboun said. "The way we present information will really affect the way they understand this information."

She also says she hopes her research can help improve the opportunities that are available to children with ASD. "I hope this will help autistic children with their education, and support them so they can have a better quality of life in general," she said.

REHACARE.com; Source: The Norwegian University of Science and Technology (NTNU)