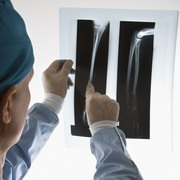 Researchers have noted an extraordinary and unexpected benefit of osteoporosis treatment – that people taking bisphosphonates are not only surviving well, better than people without osteoporosis, they appear to be gaining an extra five years of life.

"While the results seemed surprisingly good, they are borne out by the data – within the limitations of any study – and appear to apply to men as well as women," said Associate Professor Center. "When we first looked at the figures, we thought that there had to be a fallacy, that we were missing something. One of the most obvious things might be that these are people who seek medical attention, so may be healthier and live longer. So we compared the bisphosphonate group with people taking Vitamin D and calcium or women on hormone therapy."

"The comparison against these other groups of similarly health-aware people simply confirmed that our results were not skewed by that factor." Center continued. "In a group of women with osteoporotic fractures over the age of 75, you would expect 50 percent to die over a period of five years. Among women in that age group who took bisphosphonates, the death rate dropped to 10 percent. Similarly, in a group of younger women, where you would expect 20-25 percent to die over five years, there were no deaths. The data were consistent with about a five year survival advantage for people on bisphosphonates."

"We speculate that it may have something to do with the fact that bone acts as a repository for toxic heavy metals such as lead and cadmium," said Professor Eisman. "So when people get older, they lose bone. When this happens, these toxic materials are released back into the body and may adversely affect health. By preventing bone loss, bisphosphonates prevent some of this toxic metal release. While we know that this is the case, we don't yet have evidence that this produces the survival benefit."

"Osteoporosis is a big societal burden and remains a poorly understood and severely undertreated disease in Australia," said Eisman. "Only about 30 percent of women and 10 percent of men with osteoporosis receive treatment, which is unacceptable when you consider that people could be helped, and death could be delayed by several years. There is good evidence – even without this study - that treating osteoporosis reduces fractures and reduces mortality."


- More about the Endocrine Society at: www.endo-society.org