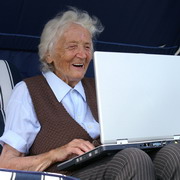 The team studied 59 participants with an average age of 84, recruited from local retirement communities in Southern California. The volunteers were split into two groups: the first group used a brain fitness program for an average of 73.5 (20 minute) sessions across a six-month period while a second group played it less than 45 times during the same period. Researchers found that the first group demonstrated significantly higher improvement in memory and language skills, compared to the second group.

The study's findings add to the field exploring whether such brain fitness tools may help improve language and memory and may ultimately help protect individuals from the cognitive decline associated with aging and Alzheimer's disease.

Age-related memory decline affects approximately 40 percent of older adults and is characterized by self-perception of memory loss and decline in memory performance. Previous studies have shown that engaging in mental activities can help improve memory, but little research has been done to determine whether the numerous brain fitness games and memory training programs on the market are effective in improving memory. This is one of the first studies to assess the cognitive effects of a computerized memory training program.

The study also received a Blue Ribbon Award from the American Psychological Association during the organization's annual convention held this week. The Blue Ribbon Awards are based on independent, blind review and scored on methodological rigor, merit, and potential impact on the science and practice of clinical neuropsychology.


- More about the University of California - Los Angeles Health Sciences at: www.uclahealth.org