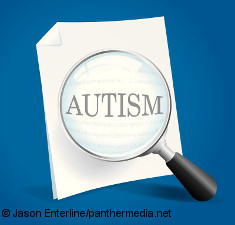 Identifying children with autism is a problem in black and hispanic kids; © Jason Enterline/panthermedia.net

The number of children diagnosed with autism has increased in recent years, but a new study co-authored by a University of Kansas professor shows that while the number of students with autism increased in every state from 2000 to 2007, black and Hispanic children were significantly underrepresented.

Jason Travers, assistant professor of special education, co-authored a study that analyzed administrative identification of autism in every state under the Individuals with Disabilities Education Act for the years 2000 and 2007. The disparity in the odds of white students identified compared with minorities might reflect a similar phenomenon associated with the widespread increase in students diagnosed with learning disabilities in the late '70s and attention deficit hyper disorder in the '90s, the authors argue, and also shows that minority students probably are not getting the same services as their peers.

Travers has studied autism and diagnosis rates previously and noticed discrepancies in the number of students diagnosed. The Centers for Disease Control have estimated that one in 68 children have autism.

"That's a pretty alarming number," Travers said of the CDC figure. "I wanted to see if there were differences in these rates. Previous research had found that African-Americans were over-identified. But the data I was looking at showed they were under-identified. This was during an era when autism prevalence rates were increasing across the board."

Administrative identification reflects rates at which schools – not necessarily a clinician – identify a child as having autism. Widely varying criteria from state to state are part of the problem, the authors state, but not the full story. White students identified as autistic increased from 2000 to 2007 in all states and the District of Columbia. The number of African-Americans identified increased in all states except Alaska and Montana, and the number of Hispanics increased in all states except Kentucky, Louisiana and the District of Columbia. While counts in all categories showed an increase, black and Hispanic increased at much smaller rates, and all three increased at lower numbers than predicted by the CDC.

"Nearly every state that had proportional representation of students in 2000 underidentified black and Hispanic students in 2007," the authors wrote. "Although there is no firm epidemiological evidence that race is predictive of autism, we found substantial racial differences in the ways U.S. school identify students with autism."

The discrepancies indicate a number of problems, Travers said. Chief among them, regardless of why white students are being identified with autism at higher rates, the results may mean services are not equally accessible among the races. When more students of one race are being identified, more services for autism will go to those students, and not to students and schools that are underrepresented. Critics have claimed that white students are being overidentified or that administrative diagnoses rates are not reliable.

"These data depict what's going on in schools," Travers said. "Whether or not they match with clinical diagnoses, the numbers can be associated with a variety of costs. They tell us about the human costs, financial resources dedicated to services, administrative costs, community costs and many others."

The disparities also suggest that white students are more likely to access early intensive behavior intervention services, educational supports, occupational supports and others designed for students with autism than their black and Hispanic peers.

Travers intends to address the disparities in future research and develop more accurate methods to predict disparities in rates of autism. One possibility is to gather data from school districts, counties and states across the country on the number of students with autism and analyze other demographics such as neighborhood median income, teacher quality, number of students that qualify for free and reduced lunches, staff turnover and numerous other factors. He would then compare that data to U.S. Census information to develop advanced statistical models that could more accurately predict indicators for autism numbers in schools.

In addition, schools and states need to identify consistent methods of identifying autism. The longer they go without, and the more prevalence numbers are used for political purposes, the greater the inequity will be for minority students, as the data suggests.

"Unfortunately, but not surprisingly, until this problem is thoroughly understood and scientifically validated methods to prevent the problem are identified, it seems that the majority of the un- or mis-identified students with autism will be children of color," the authors wrote.

More about the University of Kansas at: www.ku.edu