Blind People Have an ‘Inner Bat’ to Locate Objects 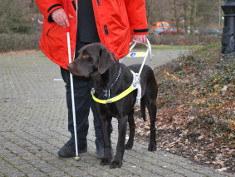 Blind people with good hearing showed the potential to use echoes to tell where objects are; © pantherme-
dia.net/Liana Klein

New research from the University of Southampton has shown that blind and visually impaired people have the potential to use echolocation, similar to that used by bats and dolphins, to determine the location of an object.

The study examined how hearing, and particularly the hearing of echoes, could help blind people with spatial awareness and navigation. The study also examined the possible effects of hearing impairment and how to optimize echolocation ability in order to help improve the independence and quality of life of people with visual impairments.

Researchers from the University of Southampton’s Institute of Sound and Vibration Research (ISVR) and University of Cyprus conducted a series of experiments with sighted and blind human listeners, using a ‘virtual auditory space’ technique, to investigate the effects of the distance and orientation of a reflective object on ability to identify the right-versus-left position of the object. They used sounds with different bandwidths and durations (from 10–400 milliseconds) as well as various audio manipulations to investigate which aspects of the sounds were important. The virtual auditory space, which was created in ISVR’s anechoic chamber, allowed researchers to remove positional clues unrelated to echoes, such as footsteps and the placement of an object, and to manipulate the sounds in ways that would not be possible otherwise.

Daniel Rowan, lead author of the study, says: “We wanted to determine unambiguously whether blind people, and perhaps even sighted people, can use echoes from an object to determine roughly where the object is located. We also wanted to figure out what factors facilitate and restrict people’s abilities to use echoes for this purpose in order to know how to enhance ability in the real world.”

The results showed that both sighted and blind people with good hearing, even if completely inexperienced with echolocation, showed the potential to use echoes to tell where objects are. The researchers also found that hearing high-frequency sounds (above 2 kHz) is required for good performance, and so common forms of hearing impairment will probably cause major problems.

Rowan adds: “Some people are better at this than others, and being blind does not automatically confer good echolocation ability, though we do not yet know why. Nevertheless, ability probably gets even better with extensive experience and feedback.

“We also found that our ability to use echoes to locate an object gets rapidly worse with increasing distance from the object, especially when the object is not directly facing us. While our experiments purposely removed any influence of head movement, doing so might help extend ability to farther distances. Furthermore, some echo-producing sounds are better for determining where an object is than others, and the best sounds for locating an object probably aren’t the same as for detecting the object or determining what, and how far away, the object is.”

Read more about University of Southampton at www.southampton.ac.uk