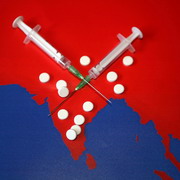 A new diabetes study at the University of Leicester has discovered that South Asians – people of Indian, Pakistani, Bangladeshi and Sri Lanka origin – have higher levels of blood sugar than white Europeans independent of risk factors that influence sugar levels.

The study of 4,688 white Europeans and 1,352 South Asians was led by Samiul A Mostafa, of the University of Leicester, Department of Cardiovascular Sciences.

Importantly, these higher levels of sugar markers in South Asians were not accounted for by differences in risk factors that influence diabetes, suggesting they were independently higher.

Mostafa, a Clinical Research Fellow in Diabetes and Endocrinology based at Leicester Diabetes Centre, said: “'We know Type 2 Diabetes is more common in South Asians compared to Europeans and is diagnosed at an earlier age. We are trying to explain reasons why this occurs beyond the well known risk factors of diet and physical activity.

“Our study suggests the main measures of glucose used in diagnosis of Type 2 Diabetes are all higher in South Asians independent of risk factors which cause diabetes such as obesity, blood pressure, smoking and gender. This may explain why diabetes diagnosis is higher in South Asians but more research is required. The findings suggest that South Asians should be monitored more closely for type 2 diabetes”, he added.


- More about the University of Leicester at: www.le.ac.uk