Blood Test at Opticians Could Help to Diagnose Diabetes 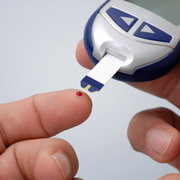 Diabetic retinopathy is currently the
leading cause of blindness;
© panthermedia.net/Olaf Karwisch

A simple finger prick test during routine eye examinations at high street opticians could help to identify millions of people with previously undiagnosed Type 2 diabetes, according to new research.

The researchers suggest earlier diagnosis could set people on the road to better management of the disease, which is the leading cause of blindness in the working age population, and that this could ultimately result in cost-savings for the NHS.

The Durham University study suggests that screening for the condition in unconventional settings, such as opticians, chiropodists or dentists, could find those people who would not routinely visit their GP, and could have potential worldwide.

It is estimated that 150 million people worldwide have diabetes but up to 50 per cent of people who have the condition are thought to be undetected and may only be diagnosed when complications occur.

It has already been shown that pharmacies and chiropodists have the capacity to carry out simple blood tests to identify Type 2 diabetes. The researchers say other places such as dentists could potentially be used to offer the test.

The study found that out of 1,000 people visiting their opticians for an eye test who were found to have one or more risk factors of diabetes, such as increased body mass index or aged over 40, almost 32 per cent were referred to their GP for further investigation after having their blood glucose levels checked.
The researchers say high street opticians are an under-utilised resource in the efforts to identify the large numbers of people with undiagnosed diabetes.

Currently, most screening for diabetes is carried out in medical settings, mostly by family doctors, but there are many people who do not visit their GP for preventative care, even if they are in an at-risk group.

While optometrists have an established role in screening people with known diabetes for eye disease, they are presently not involved in identifying diabetes.

Lead author and former optician, Dr Jenny Howse from Durham University's School of Medicine and Health, said: "Charities' campaigns have managed to reduce the proportion of people with undiagnosed diabetes but there is still a 'hard-to-reach' group who remain undiagnosed. Opticians could provide routine, non-emergency care and the simple screening can be done outside usual medical settings, such as GP surgeries."


- More about Durham University at: www.dur.ac.uk