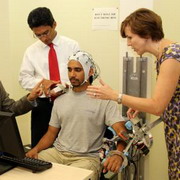 What comes naturally to most people – to think and then do – is difficult for stroke patients who have lost the full use of their limbs. New research by Rice University aims to help victims recover that ability to the fullest extent possible.

The multidisciplinary team hopes to develop and validate a noninvasive brain-machine interface (BMI) to a robotic orthotic device that is expected to innovate upper-limb rehabilitation. The new neurotechnology will interpret brain waves that let a stroke patient willingly operate an exoskeleton that wraps around the arm from the fingertips to the elbow.

Rice is developing the exoskeleton and UH the electroencephalograph-based (EEG) neural interface. The combined device will be validated by UTHealth physicians at TIRR Memorial Hermann with as many as 40 volunteer patients in the final two years of the four-year R01 award, the oldest research grant offered by NIH.

Repetitive motion has proven effective at retraining motor nerve pathways damaged by a stroke, but patients must be motivated to do the work, said principal investigator Marcia O'Malley, an associate professor of mechanical engineering and materials science at Rice.

Initially, EEG devices will translate brain waves from healthy subjects into control outputs to operate the MAHI-EXO II robot, and then from stroke survivors who have some ability to initiate movements, to prompt the robot into action. That will allow the team to refine the EEG-robot interface before moving to a clinical population of stroke patients with no residual upper-limb function.


- More about Rice University at: http://news.rice.edu