Breaking Down Barriers to Voting for Seniors 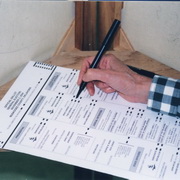 For seniors, voting can be difficult,
because they are often struggling
to read the tiny print on the ballot;
© SXC

Not only did the mobile polling efforts guarantee residents their right to vote, but according to the nursing home staff, it also brought dignity to residents.

"Elections are close. Voting matters, especially in long term care facilities where there are often hundreds of voters eligible to and interested in voting," said Jason Karlawish, Associate Professor of Medicine and Medical Ethics. "Mobile polling effectively provides nursing home residents with assistance but without bias."

Study co-investigator Charlie Sabatino, Director of the American Bar Association's Commission on Law and Aging explained that "Mobile polling is standard in other countries that have been studied, but has not been widely adopted in the United States, despite close elections where every vote counts as well as recent recommendations from the American Bar Association to improve voting practices in long-term care settings."

According to survey results, nursing home staffers reported being uncomfortable when tasked with the role of helping residents vote using traditional voting methods, especially given concerns for assisting voters too much. The mobile polling system, however, "took a lot of pressure off," according to staff member reports.

According to researchers, mobile polling should be considered on a state-by-state, county-by-county basis, auditing existing practices to determine whether mobile polling can be integrated effectively. Election officials need to be willing to perform mobile voting, provide staff to go to nursing homes. In addition, states and nursing homes need to work together to obtain and match resident lists to registered voter lists.


- More about the University of Pennsylvania School of Medicine at www.uphs.upenn.edu