Breastfeeding initiation and success is impacted by diabetes status of mother 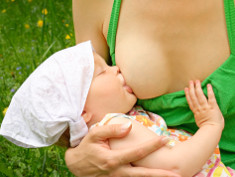 Women diagnosed with diabetes before or during pregnancy are less likely to initiate and continue breastfeeding their newborns than women without diabetes, a new study suggests.

Led by clinician-scientists in The Research Institute at Nationwide Children's Hospital and collaborating institutions, the findings point to areas for improved prenatal and postnatal education of women with diabetes.

The study analyzed data from the 2009-2011 Pregnancy Risk Assessment Monitoring System (PRAMS), which is administered by the Centers for Disease Control and Prevention. Out of nearly 73,000 women included in the sample, 8.8 percent had diabetes during pregnancy, called gestational diabetes, and 1.7 percent had diabetes prior to pregnancy.

"Infants born to women with diabetes during pregnancy are more likely to experience adverse outcomes such as hypoglycemia immediately after delivery. In the longer-term, these children are more likely to be obese and/or develop type 2 diabetes," said Reena Oza-Frank, principal investigator in the Center for Perinatal Research in The Research Institute. "Breastfeeding can help reduce these risks."

About 30 percent of women with pre-pregnancy diabetes cited illness or their use of medication as the top reasons they didn't breastfeed, which researchers said suggests that the disease and its related medications directly impacted women's decisions. Other factors influencing their breastfeeding decisions were similar between women with diabetes and healthy women, such as not wanting to breastfeed and not feeling as if they supplied enough milk for their babies. These topics could easily be addressed by prenatal educators or lactation consultants, Oza-Frank suggested.

"Women with pre-pregnancy diabetes and women who develop gestational diabetes should get additional prenatal education on the increased risks their infants may experience and how breastfeeding can help reduce those risks," said Oza-Frank, who also is a research assistant professor in the Department of Pediatrics at The Ohio State University College of Medicine. "Breastfeeding intention is often the strongest predictor of breastfeeding initiation, and by establishing intent early in pregnancy, successful initiation is more likely. Lactation consultants are an excellent resource and support for breastfeeding moms both immediately after delivery and beyond."

Pre-pregnancy diabetes and gestational diabetes can negatively impact the health of both the mother and infant, so protective behaviors such as breastfeeding could reduce certain health risks, Oza-Frank explained. But the differences between women with diabetes prior to pregnancy and those who develop gestational diabetes could impact the approach health educators take in addressing breastfeeding, she added. Continuing to study their experiences as separate populations could provide valuable information for improving breastfeeding initiation and continuation among both groups.

Oza-Frank and her colleagues plan to continue studying women in both diabetes groups by examining exclusive breastfeeding rates through six months, breastfeeding patterns through the first year of life, introduction of bottle-feeding and timing of introduction to solid foods in these populations.

More about the Nationwide Children's Hospital at: www.nationwidechildrens.org