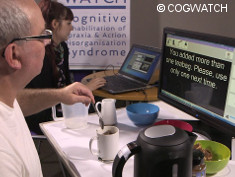 COGWATCH helps stroke patients even with everyday tasks like brewing a cup of tea; © COGWATCH

Strokes are the second leading cause of death worldwide; they kill more than one million people in Europe each year accounting for 14 percent of all deaths. About a third of the 8 million stroke survivors in the EU are left with some degree of physical or cognitive impairment affecting their ability to plan and carry out actions.

While there are already many rehabilitation ICT systems focused on treating the physical symptoms of stroke, such as hemiparesis, there aren’t many for the rehabilitation of cognitive impairments. The EU-funded COGWATCH project has developed a rehabilitation system to help improve the cognitive functions of stroke survivors.

Stroke patients can have trouble performing ordered sequences of movements, such as those required to brush their teeth or to make a cup of tea. These are often symptoms of Apraxia or Action Disorganisation Syndrome (AADS). COGWATCH is using intelligent tools and objects, portable and wearable devices as well as ambient systems to provide support at home to patients with AADS symptoms.

"We take it for granted that we can perform these activities of daily life," says Professor Alan Wing, the project’s coordinator and a faculty member of the School of Psychology at the University of Birmingham. "Yet many of these seemingly simple tasks are actually complex and involve a large number of small steps that must be performed in the correct sequence."

The COGWATCH scientists customised a prototype that helps stroke patients brew a cup of tea – a complex sequential daily task. The system consists of two tablet computers, one for the patient and one for his clinician, and sensors attached to the bottom of objects such as the cup, milk jug and kettle that track the objects’ movement, while a video camera records the entire process from overhead. On the tablet, the patient can choose an action, for example he will prepare a cup of tea with milk and sugar.

A action-recognition system is then activated: it receives the information from the sensors, compares those with the task model corresponding to the steps of preparing a milk and sugar cup of tea. If the patient makes an error in preparing the tea, then system prompts the correct action using any combination of video, audio, text or vibration to suggest the right step.

To test the system, the COGWATCH researchers conducted a randomised study with 30 patients. Compared with the control group, participants who were trained using the COGWATCH system, showed statistically significant improvements in tea-making performance; they made 54 percent fewer errors and showed a 20 percent reduction in time taken to make a cup of tea.

Apart from helping stroke patients regain independence, the COGWATCH system could also enable occupational therapists to work with more patients or develop more of each patient’s skills. The system already provides useful information on the patient’s task performance over time.

Longer-term, COGWATCH could facilitate the earlier discharge of patients, thus lowering their risk of infection, allowing them to return to their familiar home environment, and freeing bed space.

"We would eventually like to offer systems that are affordable enough for home use so that, for example, every hospital could loan them out to its patients," concludes Professor Wing.