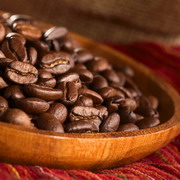 Caffeine, which is widely consumed around the world in coffee, tea and soft drinks, may help control movement in people suffering from Parkinson's. This is the finding of a study conducted at the Research Institute of the McGill University Health Centre.

The study opens the door to new treatment options for Parkinson's disease that affects approximately 100,000 Canadians.

"This is one of the first studies to show the benefits of caffeine on motor impairment in people who have Parkinson's disease," stated Ronald Postuma, lead author of the study. "Research has already shown that people who drink coffee have a lower risk of developing Parkinson's disease, but until now no study had looked at the immediate clinical implications of this finding."

Caffeine — one of the most widely used psychomotor stimulants in the world — it acts on the central nervous system and cardiovascular system by temporarily decreasing tiredness and increasing alertness. According to Postuma, sleepiness is commonly associated with Parkinson's disease. "We wanted to discover how caffeine could impact sleepiness as well as the motor symptoms of Parkinson's disease, such as slowness of movement, muscle stiffness, shaking and loss of balance."

"The people who received caffeine supplements experienced an improvement in their motor symptoms (a five-point improvement on the Unified Parkinson's Disease Rating Scale, a rating scale used to measure the severity of the disease) over those who received the placebo," said Postuma. "This was due to improvement in speed of movement and a reduction in stiffness." Caffeine had only borderline effects on sleepiness, and did not affect depression or nighttime sleep quality in the study participants.

Larger-scale studies need to be carried out over a longer period to clarify these caffeine-related improvements. "Caffeine should be explored as a treatment option for Parkinson's disease. It may be useful as a supplement to medication and could therefore help reduce patient dosages," concluded Postuma.


- More about the McGill University Health Centre at: www.muhc.ca